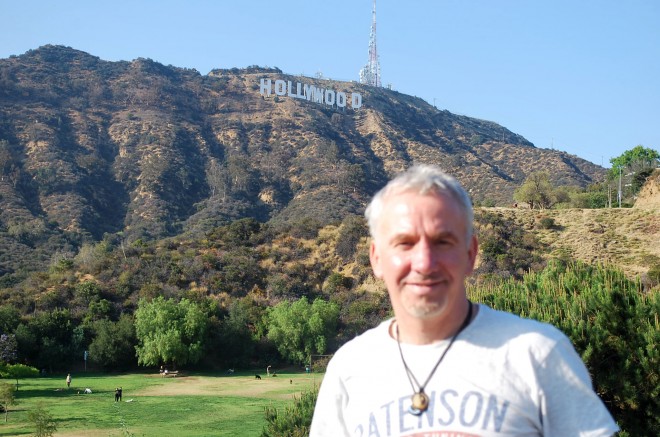 A book by well-known Letterkenny man, Michael (Mickey) Murray, certainly grabbed my attention when it arrived earlier this week.
The 400-plus page tome entitled ‘Wake the F**k Up (Life is but a dream) is described as being the complete guide to enlightenment. In it, he also makes explosive claims of garda and political corruption as well as cronyism.
Murray (51) – who I would have played football with and against thirty years ago – has since gone on to become a leading expert in “metaphysics, consciousness and spiritual psychology”. His book spells out what is required of each of us in order to ‘wake up.’
Today, he spends his time living between Los Angeles and Dublin and travels the world extensively teaching workshops, seminars and spiritual conferences.
On Wednesday he spoke to the Donegal News from his Dublin base from where he will embark on a European tour this summer.
“I agree with you, I was not a good boy, but every sinner has a future and every saint has a past. Life is good now though thank God,” he said.
“Some people might remember me as not being a good boy when I was seventeen or eighteen but what many don’t realise is that I got a rough time during my time at St Eunan’s College. That left me a bitter person. I left school, and education, at sixteen and maybe the fact that I was beaten over the head with a T-square, aged eleven and twelve, had something to do with what I was at in my later teens – it’s cause and effect,” he said.
What about the book’s title? Why chose to use an expletive?
“I did two covers for the book. We all operate in two rooms – a good room and bad room – and we’re always putting people into one room or the other so I decided to place the book into two rooms too.
“‘Wake Up! Life is but a dream’ is the original title but, following market research of three hundred people, I decided to do a second cover, a bad cover if you like, bearing the title Wake the f**k Up. Life is but a dream.
“In market research, 299 of the 300 people surveyed said they would prefer the bad title but since it’s release it’s closer to 60/40, so maybe the survey results weren’t as clear-cut as I initially thought,” he said.
Murray, whose father Charlie passed away last month aged 93 years, said the contents of the book effectively contain his teachings which he has been relaying to audiences throughout the States these past six years.
“This is what I do. I’ve over 200 YouTube videos,” he said.
The first three chapters of the book chronicle the life and times of Michael Murray.
“I’m not trying to have a go at anyone, but I wanted to put into context my journey. I’ve been to hell and back to get to where I’m at today. I tried to be as gentle as possible, but I also needed to show the pain that I was in at that time. I’m in a much better place now that I was seven years ago,” he said.
Those early chapters describe how several near-fatal accidents during the first thirty three years of his life made him familiar with “extraordinary, repeated out-of-body experiences.”
Then in 1999, Michael entered “the dark night of the soul”, where he would remain until 2008. This was the worst time of all in Michael’s life, it was a time of great darkness, extreme loneliness, forced isolation and cold despair where all hope was finally surrendered.
It was during this dark period he fell into addiction and, he says, a major internal transformation took place. Seven nights after this surrender, he simply woke up, he says. Within four months he underwent three major experiences, which culminated in his higher “Self-Awakening” in 2009.
During those bad times, he was confined illegally and unjustifiably – sometimes in virtual solitary confinement – over several years at his own home in Letterkenny by what he claims were corrupt Garda police acting on behalf of a powerful local politician and businessman.
“In my early working life, I had benefited personally in many ways from his help (politician). He first used his behind the scenes influence to find me employment with the local health authority. Later, he helped me again in quite a different way.
“I had foolishly obtained money from a local bank, which I was not entitled to, by manipulating accounts. I was charged in court, but through the politician’s intervention, I only received a suspended sentence.
“In 1991, he used his influence in securing a post for me in the maintenance department at the local Institute of Technology – fro a list of 94 applicants. I held that permanent post for some ten years until the politician and I parted ways,” the book reads.
Thereafter, Murray made an unsuccessful bid to open a nightclub; ran a cafe bar with pool tables and amusements and, in 2002, he opened a property management company.
During that same period however, he says he struggled desperately to retain his health and mental equilibrium. It was then that he went through other, similar but more extensive ‘internal’ experiences which then culminated in a very deep and profound spiritual awakening on the night of September 29, 2008. This also happened to be his 44th birthday.
Then in 2009, Michael began to give talks about the revelations he received, directly from his newly acquired awakened state of mind.
“I never looked back from that book (A Course in Miracles) but it was something that I had to experience myself first. It touched on something unbelievable. I’m in a very good place. I’m kept very busy and life is good,” he said.