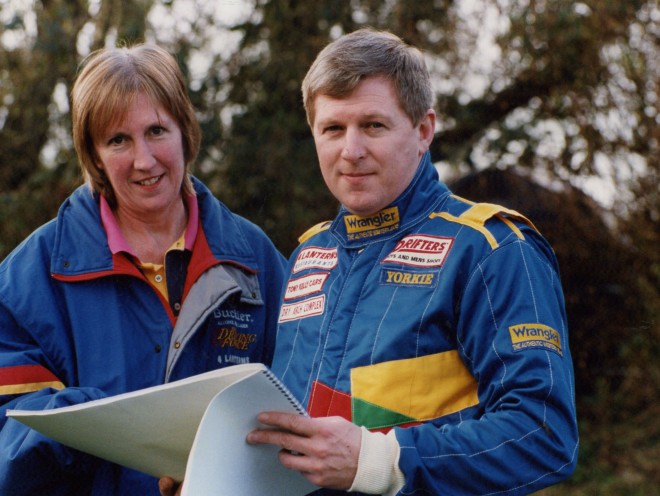 James Cullen with his co-driver the late Ellen Morgan in the early nineties.

WITH the 2016 Donegal International Rally less than two months away, local rally legend James Cullen is itching to get back behind the wheel.
It’s 25 years ago this year since one of Donegal’s greatest rally drivers won his home event for the first time and more than a decade since he last competed in the famous three-day event.
Winner on two occasions (’91 and ‘99), James finished second a further five times while he was third on four occasions. He was also Clerk of the Course twice and his name is synonymous with the Donegal Rally.
As part of their bid to commemorate his maiden win, a group of friends have come together to fund-raise in a bid to secure the money needed for him to take part in this year’s rally.
“During my time I raced against some of the very best in the sport – men like Bertie Fisher, Mark Lovell and Colin McRae – and they’re all gone. Closer to home, men like Eamon Harvey, Sammy Fisher and James McDaid have also passed away not to forget my own co-driver Ellen Morgan who sadly lost her battle with cancer ten years ago. I’m truly indebted to the lads for this opportunity,” he said.
The idea to get James Cullen (61) back behind the wheel of a rally car was first raised at
Michael Gallagher’s 80th birthday party eighteen months ago. The owner of the Mirabeau Steak House is a keen rally enthusiast.
“He mentioned the fact that the twenty-fifth anniversary of James’ win was fast approaching and he felt that we should something proper to commemorate it,” Steven Sheridan explained.
Along with Denis Orr and Aidan Caddye, they then got together and established the cullen4donegal.com fund-raising website.
Tomorrow night, Saturday, the first fund-raising event – the Bonus Ball competition in conjunction with the National Lottery – takes place.
Numbers cost €100 and your entry will go towards helping fund James’ run in the Rally and you can win a trip for two to Rally Finland, with Alan Verso, valued at over €2,000
The prize includes return flights from Dublin Airport, car hire, five nights accommodation in Jyvaskyla as well as stage passes. The draw will be tonight’s National Lottery Draw Saturday at 8pm.
“This is not only about getting James back into a rally car, it’s about re-igniting rallying nostalgia for older bucks like us and to help memories of that era in Irish rallying flood back.
“To put this plan together we have sought the help of a number of local businesses who have generously decided to support us but we need many more as anyone who is involved in Motorsport will know of the costs involved,” Mr Sheridan said.
James drives for Jim McGlynn’s Buses where he collects and delivers the children both from St Bernadette’s and Little Angels.
Pink Sierra
Initially, it had been hoped that he would do the rally it in a Pink Sierra but now he hopes to do it in a MK2 Escort – like the one he competed on the Donegal Rally in years gone by – or an even faster car!
“Nothing in rallying ever stands still and the cars that I would have driven would be left in the wake of the modern machines. I know what it is like to try and secure sponsorship for events and people are great to come on board. It’s very special to still feel appreciated after all these years,” he said.
Details of the fund-raising effort are on the cullen4donegal.com website or contact Denis Orr (087) 2619-727, Stephen Sheridan (087) 2439-393 or Aidan Caddye (086) 8546-700 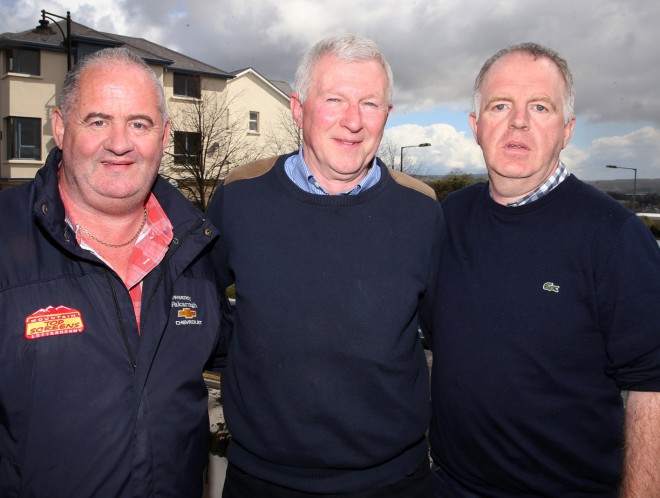