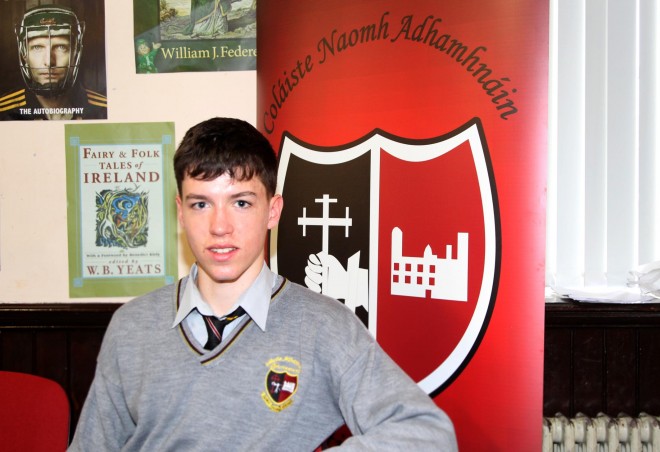 A TALENTED young linguist has been selected to represent Ireland on the world stage this summer.
Donal Farren (17), a fifth year student at St Eunan’s College, Letterkenny, will join contestants from 40 different countries at the International Linguistics Olympiad in Mysore, India, taking place from July 25 to 29.
The international problem-solving contest challenges students to test lateral thinking skills by decoding some of the world’s toughest language and linguistics puzzles.
Knowledge of a second language is not required, however, as the puzzles are designed to test contestants’ reasoning skills, logic and patience.
Donal is the eldest son of Dara Dunne and Anthony Farren, Belleighan, Manorcunningham. He beat off competition from more than 2,000 students from across the country to win his place on the four-person team which was selected at the national All Ireland Linguistics Olympiad, run by the Science Foundation Ireland ADAPT Centre.
A talented athlete, Donal came fourth in the All-Ireland Schools Intermediate 1,500 metres final last year while he was also a member of the Donegal U16 Buncrana Cup GAA squad and plays with St Eunan’s GAA Club.
“I wasn’t expecting the email (to say he was selected) when it came through during the Easter holidays. There’s two lads from Dublin and a girl joining me on the team,” he said.
“One of the teachers at the college entered us into the first round at which there were about 2,000 competitors and three of us made it down to the final hundred and, luckily enough, I was selected to be on the team.”
Last year, students were asked to decode numerals in the Nahuatl language of the Aztec Empire; decipher Soundex, a phonetic algorithm for indexing names by sound; interpret ancient Somali poetry; and decrypt sentences from the Wambali language of Australia (spoken by only 89 people world-wide).
“We had questions relating to the Estonian and Aboriginal languages as well as a type of sign language used by Cistercian Monks,” he said.
The Ireland Linguistics Olympiad team will meet at Trinity College Dublin in May ahead of travelling out to India. Ireland first competed in the IOL in 2009, and has taken part in seven Olympiads. Last year they brought home a bronze medal and Niamh Lynch (18) of Loreto College, Letterkenny, was part of the Irish team in Bulgaria.
“Last year’s bronze medal was the first and, to date, only medal won by Ireland. It would be nice to come home with a medal and we’ll do our very best,” he said.
Before that, Donal will look to pick up a medal in the 1,500 metres at the Irish Schools final in May. A member of Letterkenny Athletic Club, he would like to study science when he finishes college or, in an ideal world, become a full-time athlete!
The IOL is one of 12 International Science Olympiads for secondary school students, and has been held annually since 2003.
According to the IOL, even the hardest problems require only your logical ability, patient work, and willingness to think around corners! 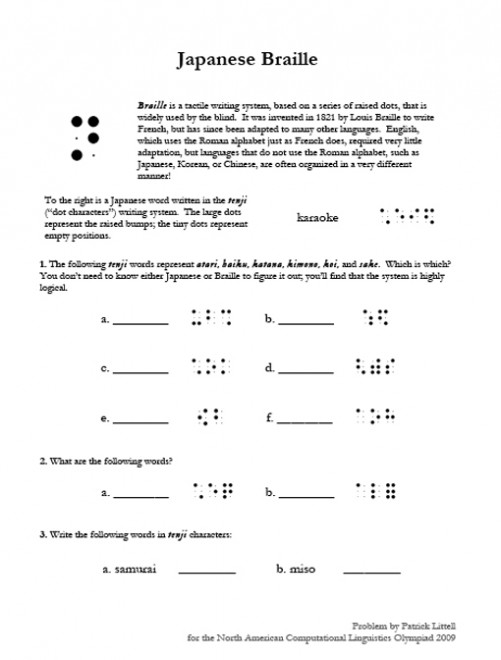 Japanese Braille – the subject matter for one of the questions.