Advertisement
HomeSportGAADECLAN BONNER: Players will want to go out with a bang
Advertisement

I don’t think anyone was overly surprised to see Donegal’s league campaign come to a halt last Sunday.

It was going to take a huge performance to topple Dublin, and when Rory Gallagher said after the Monaghan game that he was giving the players a week off training, you figured that they wouldn’t have sufficient preparation done to face the All-Ireland champions, and that’s the way it turned out.

The pattern of the match was very similar to the last couple of league matches that Donegal have played.

It was a reasonable enough first half, but they were then slow out of the blocks after the restart, and faded poorly towards the end.

Looking at the game, there weren’t a pile of positives to take from it, in all honesty. 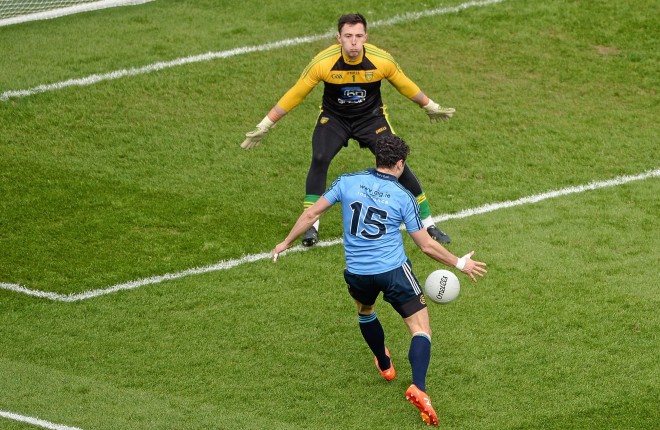 We shipped 1-20, which is a big tally to concede, and it wasn’t the first time that has happened, as Roscommon scored 1-19 against us earlier in the year. We look open at the back, which is not something you would have said over the past five seasons.

The team is not firing in attack either. We’re still overly dependent on Michael Murphy and Patrick McBrearty to score, and Martin McElhinney was the only other player to register a point last week. In contrast, Dublin had eleven different scorers, and it wasn’t that long ago, that we were getting contributions from all over the field.

That doesn’t seem to be happening this year. The likes of Ryan and Eoin McHugh have been scoring from the half-back line, but we’re not getting enough from our midfielders and our half-forwards.

You can’t be relying on your defenders to be popping up and scoring against Dublin, because that will leave you exposed at the back. The likes of Ciaran Kilkenny and Dean Rock are brilliant at finding space when teams lose their defensive organisation.

As the game petered out last Sunday, thoughts started to turn to what needs to be done to get ready for the championship.

Things look a little bit flat at the moment. We got three wins early on, and everything seemed to be going swimmingly, but we have struggled since that and lost five on the bounce.

I would say the players are glad that the focus is now turning towards the championship.

That is the number one priority this year and the reason why so many of our elder statesmen stayed on for another term.

There are eight weeks to go until the game with Fermanagh or Antrim, and I’m sure Rory and his backroom team will be leaving no stone unturned to get things right for June 12.

The Ulster Championship is a hugely competitive tournament, and while teams down the country can look ahead to August, Donegal can’t afford to that.

They need to be ready for earlier in the year, and I’m sure that they will be following a programme that will have them at their peak or near to their peak for eight weeks’ time.

It’s a favourable draw this year against either Fermanagh or Antrim, and you would still expect Donegal to beat both teams, but it won’t be easy. You need to be at the right level.

I do think that whatever happens over the summer, you are probably looking at the final season for a lot of Donegal’s players.

The experienced men in the dressing room owe us absolutely nothing. They have been incredible servants in the green and gold, and many of them have put their lives on hold for their county.

Rory needs his team to lift things now over the next two weeks, and when he looks around at his squad, he will know that he has experienced players in abundance, and he needs them to provide leadership.

The end may be close, but they will be determined to go out with a bang.

After watching the two semi-finals last week, I think there can be no doubt that Kerry and Dublin are the two best teams in Ireland.

I don’t think it is too early to say that they will be counties competing for the All-Ireland this year, and I can’t see any team coming close to them.

They are on a different planet, and for me, Kerry are the team to beat and they will take some stopping.

Roscommon are a well-organised side, but Kerry’s footballers are so clever and it didn’t take them long to run the Rossies ragged.

Kerry have the most natural footballers that you can get. They read the game brilliantly, their foot-passing is immense, and all their forwards can score.

Marc O Se scored a point last week, where he sold a dummy to his opponent and then fired over from 45 metres. It was an outstanding piece of skill, and that’s their corner-back!

Eamonn Fitzmaurice has done a great job and they are strong all over the field.

They will get bodies back and be difficult to break down, and they will be cynical, make no mistake about that.
Kieran Donaghy and David Moran have been flying at midfield, and you have the likes of Bryan Sheehan and Johnny Buckley to help out in there as well. And that’s before you come to Anthony Maher, who is making his way back from injury.

They have serious competition in the forwards as well, and it’s great to see the Gooch looking like his old self once again.

Kerry have won the last two All-Ireland Minor titles, and they have some fantastic players from those teams looking to break through as well.

I honestly think that to you could see Kerry enjoy a period of dominance in Gaelic Football, similar to that which Kilkenny have in hurling.

Yes, Dublin have a huge pick of players, and massive resources to boot, but they aren’t bringing through the calibre of player that Kerry are at the moment.

They have the tradition in the Kingdom, but they were also working very hard down there too, and for me, they are the top team in the country this year.

The Minors have a big game on Saturday when they play Monaghan in the Ulster Minor League semi-final.

They have started the season well and have recorded good wins against Antrim and Derry over the last few weeks.

Things are building up nicely, and a spot in the final next week would be great preparation for the championship.