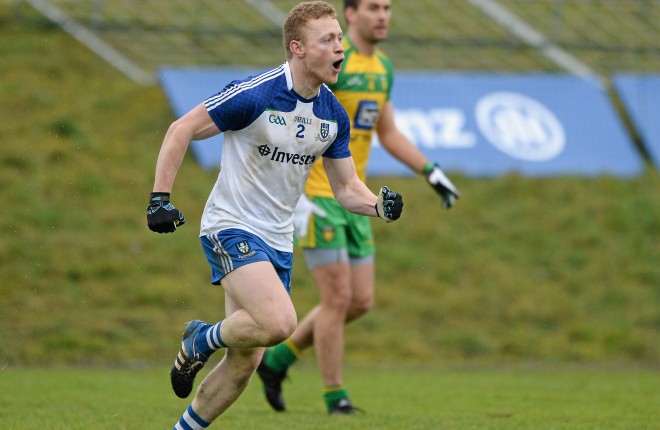 Monaghan are our bogey county and once again, they got the better of us last Sunday.

Traditionally going back for the last 30 years, they are a county that we have fared poorly against, and for some reason, they seem to hold the upper hand on us.

That trend continued in Castleblanyey last weekend, even though we started the game very well.

We were seven points up after 19 minutes and everything was going to plan. We had the foot on their throat so to speak, but we allowed them back into things.

You are never more vulnerable than just after you have scored a goal, and Monaghan raised a green flag less than a minute after Martin McElhinney had done likewise at the other end of the pitch.

From a defensive point of view, the ease at which Monaghan got in behind the Donegal defence for Daniel McKenna’s goal was staggering.

Perhaps, Donegal didn’t think Monaghan had it in them, because for the opening quarter they were lacklustre and rarely threatened. However, that goal knocked the wind out of Donegal and ignited the Farney county’s comeback.

We only led by three points at the break, which was not enough after dominating the opening 35 minutes for long periods.

Monaghan have shown over the last few years that they are a decent side and after a poor opening half, you always felt that they would improve in the second period, and that’s how it panned out.

The gradually started to eat into Donegal’s lead and midway through the second half there only looked to be one winner, as Monaghan were coming forward with attack after attack.

In fairness to the Donegal defence, they withstood the pressure well, but in attack, we weren’t clinical enough, and worryingly we gave up too many turnovers.

The defeat is not the end of the world for Rory Gallagher and his team, as they still qualify for the league semi-finals, but I do feel we missed an opportunity to inflict a psychological blow.

It looks likely, all being well, that we will encounter the Farney county again in the Ulster Championship semi-final, and we could have got one over Monaghan by relegating them last week.

It was a big game for Malachy O’Rourke’s team and you could see what it meant to them to retain their top tier status.

There were hugs and fist pumps, and even substitutes, who would normally be disappointed not to get on, were jumping around the place.

It was like a championship victory, and I do feel we missed an opportunity to put them down a peg or two on their own patch.

It wasn’t the first time that we faltered badly in the second half of a game this year and that needs to be addressed.

The first half performances have been decent, and generally over the last numbers of years, if Donegal went in front, they didn’t relinquish their lead easily.

Yet this season, the fitness base isn’t there to dominate matches, and we are being overrun in the last quarter. Rory has indicated that they haven’t done a pile of training yet, and maybe he is trying to ensure that the team will peak at the right time.

Looking back at the League campaign, the work was done in the first three matches, and thankfully so, because one slip up could have seen us relegated.

We have lost the last four games, and to be honest, I do think there are worrying signs at the minute.

We go into a match with Dublin this weekend, in the league semi-final, and I’d imagine that Donegal probably would have wanted to avoid the All-Ireland champions.

But to me, we have been presented with an excellent opportunity. Let’s throw our young lads into the deep end, and see if they can handle it.

We have good young lads coming through, with strong characters, and even if things don’t go for them this week, they will still bounce back.

To me, there’s no doubt that Dublin are not as strong as they have been. Now I know that they have won their seven regulation league games, but without Rory O’Carroll and Jack McCaffrey they are not as formidable.

That Dublin team have pockets full of medals now, and I know they are determined to win back-to-back All-Irelands, but do they have that same drive this year?

I think we should go out and have a go at them. It’s eight weeks to the championship after Sunday’s game, and if players want to be in the first 15 on June 12, it’s time to put their best foot forward now.

Donegal’s tactics are bound to court a lot of attention again this week, and I would say their objective will be to be cautious in the first half and make sure they are still in the game at half-time.

If they are still in contention, then you can throw Michael Murphy into full-forward and lump the ball into him to see what the Dubs are really made of.

Roscommon and Kerry square off in the other semi-final this week and that should also be a good game for neutrals to watch.

The Rossies’ league campaign tailed off slightly towards the end of the campaign, and they were beaten by Dublin in Carrick-on-Shannon last week.

That game drew a lot of attention because the Dublin fans had to be bused to Leitrim from Roscommon for the encounter, and some people were even charged €10 for the pleasure. 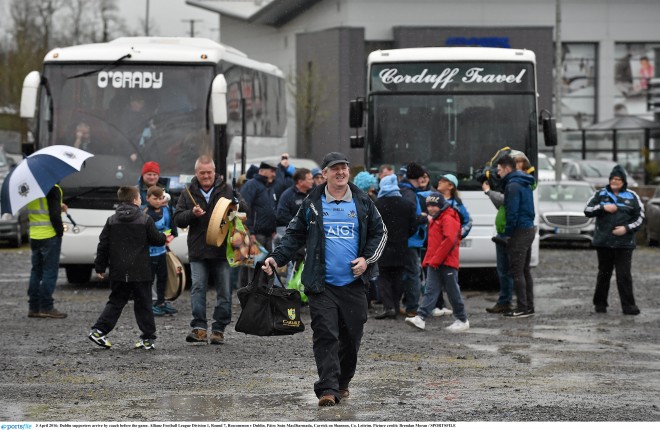 Your heart would break for them, having to go out of their way for a match. They will also have to travel to Kilkenny for a game in the Leinster Championship.

That will be a gentle reminder for Dublin fans of what life is like for supporters from other counties. It’s not all state-of-the-art pitches and corporate boxes outside of the Pale, you know!

However, Roscommon do need to get Dr Hyde Park sorted out, because no team wants to be forfeiting home advantage in the league, especially as it was always a very tough ground to go to.

The Rossies did extremely well to qualify for the semis, but they will be preparing for a backlash from Kerry this week after defeating them in the league in Killarney.

Kerry have got their house in order since that game, and they seem to be developing a strong panel.

It’s hard to look past a Kerry-Dublin League Final and if that transpires it should be a mouthwatering contest.

The Donegal minors had a good victory against Derry on Wednesday and by all accounts, we have a useful side again this season.

There’s a lot of good work going on at the moment, and it’s important that we are bringing through players with a winning mentality.

Dublin, Roscommon, Mayo, and Kerry are all producing good underage teams, and if we want to keep pace with those counties, we need to keep our conveyor belt going.

The big thing is to be patient and give young players a chance to find their feet at senior level, and Cavan is a case in point, as to why you should do that.

It takes time to blend these things together, and this season, things have kicked into place. They have won promotion to Division 1 and are serious contenders for the Anglo Celt Cup this season.

Patience is important. The men driving Cavan on now are all 23, 24, or 25 years-of age. Most of them will be finished up with college, having got summers in America out of their system, and have developed fully. They are now ready to make the next step.

The reality in Donegal is that a number of our senior panel are coming to the end of their careers, and there will be a period of rebuilding.

Followers of the county team need to be patient, because our talented young lads will come good, but it will take time.