Advertisement
HomeSportGAADECLAN BONNER: GAA should have left U21 Championship
Advertisement

There are many days when the GAA leaves you scratching your head.

Last Saturday was another one of those occasions, as I watched four teams going hell-for-leather to try and win a spot in the All-Ireland Under 21 Final, and they served up magnificent entertainment.

There were two fantastic battles, but when the action came to a close, it dawned on me that we have only one more year of the competition to enjoy in its current form.

The decision was made at Congress to replace the Under 21 Championship with an Under 20 grade, and it’s something that I am not a fan of.

I honestly believe that the Under 21 Championship in its current guise is one of the best competitions in the GAA calendar.

Sure, there are problems that need ironed out with it, but to me, the standard of football is excellent.

You get open, expansive football and that leads to great scores and big tackles. There’s no back door – it’s all or nothing.

In the first game last week, Dublin looked like they were going to beat Mayo when they went four points up.

However, this Mayo team have a trait where they never give up. They came back from the dead against Roscommon in the Connacht Final, and they did the same again on Saturday.

When the chips were down last week, it was their senior star Diarmuid O’Connor who stepped up.

Under the new rule changes, O’Connor would not be eligible to play in the Under 20 Championship if he was underage, because he has already represented his county at senior level.

That just doesn’t seem right to me. Granted, there are arguments about player burnout, and O’Connor probably has a heavy workload, but for his development, supplying the type of leadership that he gave last week can only auger well for his future.

O’Connor has already won Young Footballer of the Year, but he is still relatively new to the Mayo set-up.

At the moment, Diarmuid O’Connor is still very much a small fish in a big pond in that environment.

But for the under 21s, he’s the main man. When the chips were down, O’Connor stood up, and he will be a better player for it. 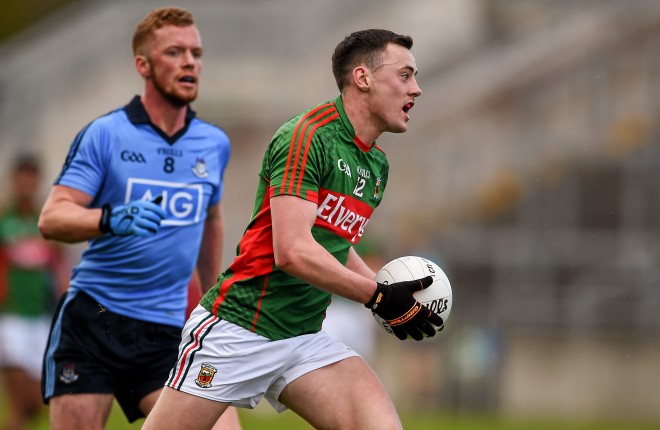 Michael Murphy is an example of a player like O’Connor that developed huge leadership traits while at under 21 level, and then brought it through to senior grade. I definitely think that is something that we will lose when the new changes are introduced.

In the second game, Monaghan were always playing second fiddle to Cork, and while the Rebels didn’t put them away, the Farney county were always trying to catch up.

Monaghan had no-one to contain Michael Hurley, and their full-back line just wasn’t up to it.

The final is now set for Ennis and it should be a cracking tussle between Mayo and Cork.

We saw high-scoring returns in those Under 21 semi-finals last week, and we have also seen them in the first couple of weeks of the All-County League in Donegal.

For one reason or another, the blanket defences don’t seem to be appearing at the moment, and defenders are struggling.

They have become accustomed to playing with sweepers and plenty of back-up, but it is becoming more and more frequent to see players being left one-on-one again.

The art of defending is not as strong as it once was, and it probably isn’t being coached enough at present.

When Jim McGuinness came in as Donegal manager, he identified that the county team were giving up too many scores, and the first thing he set about doing was making sure his defence got significantly harder to breach.

That was copied up and down the country at all levels for a few years, but there has been a shift over the last 12 months towards a more expansive, power-based style of football.

That leaves gaps at the back, and you can see some forwards are starting to enjoy playing again. They don’t have to beat three men to get a shot away anymore, and defenders are going to have to raise their game.

The four teams that have really started the year well in Donegal are Gaoth Dobhair, Kilcar, St Eunan’s, and Naomh Conaill.

That’s no surprise as they probably have the strongest panels, but there are a few other clubs that will need to get their act together fairly quickly.

The four league finals take place in Croke Park this weekend, and while sometimes this is a weekend that doesn’t really capture the imagination, you can’t say that this season.

Cavan and Tyrone will square off in the Division 2 final, and that should be a good close game.

Terry Hyland has done a decent job with Cavan, and you have to credit the Cavan County Board for sticking with their man, when he came under pressure after an underwhelming 2015.

He knows their young players better than anyone else and I believe Cavan are going to be a serious force in Ulster Football over the next couple of years.

Cavan is a great GAA county and I work up there a good bit. They’re really passionate about the game even through lean times, and I certainly wouldn’t begrudge them some success.

Tyrone are favourites this weekend, and while I expect them to win, it wouldn’t be a huge shock if Cavan were to win.

Mickey Harte said a couple of years ago that no team from Division 2 could win the All-Ireland, but this week he was moving the goalposts slightly, by saying no team of Division 2 standard could win it.

He claims that while his team were operating in the second tier, they were really of a Division 1 standard, and to be fair, it’s hard to disagree with him.

Tyrone have impressed this year right since the start of the McKenna Cup, and they have their eyes on the Anglo Celt Cup this season, make no mistake about it.

Dublin start the Division 1 final as favourites, but I think Kerry are going to win it.

People are saying that if the Dublin forwards open up, then Kerry won’t be fit for them, but the men from the Kingdom have put a fair bit of impetus on the league this year and they are going well.

Kerry have a really strong midfield that will definitely match, if not better Dublin’s, and up front they have loads of quality.

I don’t think we will see any shadow-boxing this Sunday. I think both teams will go at each other because they can afford to.

These teams won’t meet again for four months, and this weekend’s game is a chance to lay down markers for the business end of the season.

I wouldn’t be surprised if both teams are given a week or two off after the match, and build themselves up again for the championship.

It’s a game that always entices spectators, and there is chat that is going to be the largest ever crowd at a League final, even bigger than when we played in front of 60,000 people at both the League final and the replay in 1993.