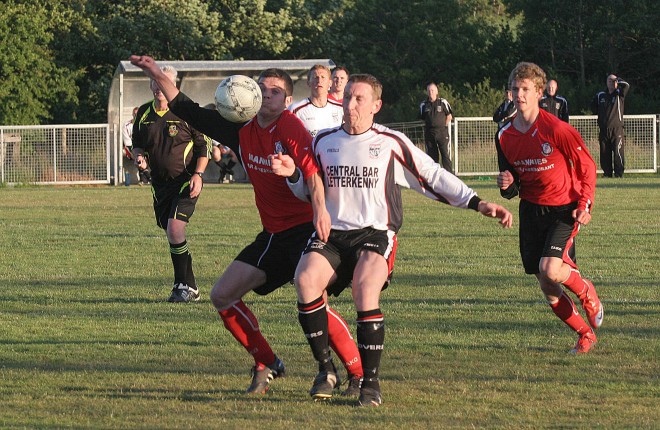 Shane Bradley is back playing for Letterkenny Rovers

Letterkenny Rovers defender Shane Bradley says it didn’t take him long to “get the bug again” when he came out of retirement to step back into the defence at his former club.

“I’m really enjoying it, it didn’t take long at all to get the bug again. I was worried that perhaps the sharpness wouldn’t be there – it probably isn’t just yet, but I suppose the experience I have knowing when to run or not to run is a help.”

A notable young player in his days with Drumkeen and then Fanad United, Bradley went on to play almost 300 games for Finn Harps before moving to the Ulster Senior League and Letterkenny Rovers.

“I stopped playing with Rovers about six years ago and I kept in good enough shape but to be honest going back to playing wasn’t something that had crossed my mind.”

As it turned out, it was a series of events that eventually led to him donning the black and white of his former club again and he is relishing the challenge now.

“I met Eamon and Liam O’Donnell at the Finn Harps v Limerick play-off game and they were joking with me about being in good shape with Eamon saying he might give me a call. To be honest I thought nothing more of it until he actually did call when his left-back moved away to Canada, but I have to say, I really am glad to be back.”

There have been some changes in the dressing room since his last days with Rovers, but he did know that former Harps team-mate Johnny Minnock was still playing as were others he knew like Darren McElwaine, Rory Kelly and Terence Shields.

For Shane though, the biggest factor was the support that his wife Rosaleen gave him once the opportunity arose.

“I can play, but I can’t really train too much or I’d be too sore, so I knew that going back would present some difficulties for me. Rosaleen has been brilliant, and she encouraged me to go for it, if it was something I wanted and to go give it everything for the few months.”

Bradley turned in a starring performance last Sunday when Rovers trekked to Cork to play Ringmahon Rangers in the Intermediate Cup semi-final, but they were gutted to concede a last-minute leveller that means they have to do it all over again in two weeks time.

“We had a talk about it in the bus on the way home and were saying if the draw was made now and we had a home game in the semi-final, would we take it? That’s exactly what we have except this time we know a little more about the team we are facing, so we know what a great opportunity we have. Yes it was disappointing the way it happened last week, but we’ve always known that it might take a replay and maybe even extra time to get through and we still have that opportunity.”

Before then though Rovers have another massive game this weekend when they travel to play Portmarnock in the FAI Senior Cup.

“It’s a great opportunity for us to get through and hopefully to get a home draw against one of the big teams, but they are also in the Intermediate Cup and if we were to win against Ringmahon in the replay we could possibly meet in the final so this weekend could be a cagey enough affair.”

Whatever the outcome this Sunday, Bradley who played when he was a teenager for Eamon McConigley at Fanad United, is fully in agreement with his boss now about the squad that Rovers has assembled.

“They are indeed a hard-working bunch of lads. There is a great blend of youth and experience in there and a lot of hunger. Anthony Gorman’s training sessions are excellent and there is such an intensity to them.

I’m only in the door, but these boys have done all the hard work to get this far. I think it would be briliant for everybody if they get the rewards for that.”