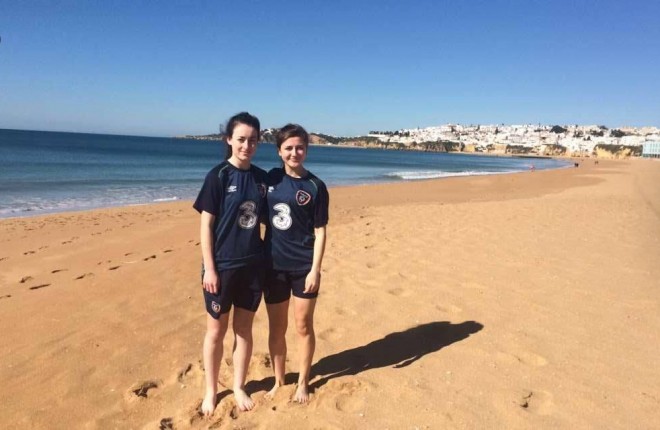 This week was always likely to be a good one for Roma McLaughlin, as she turns 18 and is set to travel to Portugal with the Irish U-19s squad. The news that the midfielder was awarded the Continental Tyres Women’s National League Player of the Month award for January/February is the icing on the cake.

McLaughlin signed with Peamount United from her home team Greencastle and has settled well into her first season of the Women’s National League. The young midfielder was honoured for her superb form over January and February.

“I feel like I’ve been awarded player of the month because I’ve been consistent throughout our games but I think that it took me a few months to actually get used to the standard of the league. I am loving my first season with Peamount United. I feel that as every game goes on we are developing as a team and getting some good results and we all work well together.” said McLaughlin.

The playmaker’s game has been going from strength to strength since transferring to Peamount United. While playing at home for Greencastle, McLaughlin stood out on the pitch as a class act but the higher standard of league and competition has improved her game.

“It’s a completely different pace. The national league is a lot faster with less time on the ball and it is also a lot more physical. I feel that my fitness has definitely improved with games every weekend, I’ve gotten sharper and playing with experienced and older players really pushes you on.” She explained.

While things are going well for the midfielder at Peamount United, McLaughlin has also been called upon for International duty. McLaughlin will travel with Dave Connell’s U-19’s Irish squad to take part in two friendlies against the hosts Portugal in preparation for the UEFA European Championship Elite Phase qualifiers. McLaughlin has been part of the Irish set up throughout underage football and has high hopes for this year.

“Being in the Irish set up has been amazing. It’s something I’ve wanted to do since I was a young age and I’m glad I have the opportunity. I’ve had some brilliant experiences in reaching two European finals. Hopefully we can push on and reach the finals again this year but it will be tough.”

There will be little time for birthday celebrations for the Greencastle woman as she once she returns her attention turns to National League action as Peamount United take on UCD Waves this Saturday.