There were a number of controversial decisions made at Congress in Carlow last week.

As the current Donegal Under 21 manager, the decision to change the competition to Under 20 was obviously something that grabbed my attention.

I’m a big fan of the Under 21 Championship, but there’s no doubt that something isn’t quite right with the timing of it presently.

It’s tough at the moment because lads are involved with third level football, and they are making inroads into senior set-ups as well.

The decision to move it to the summer time is a strange one, and I don’t know if it will work.

Where will it leave club fixtures? It is said that the Under 20 games will be played midweek, but if there’s an important intercounty game, the manager is not going to want to see his star players lining out for their clubs a few days before. That’s going to be a major issue.

We’ve been told that anyone who is named for a senior inter-county team will be ineligible for the new competition.

There’s a theory that once you’ve played senior than there’s no need to play Under 21, because the standard is lower.

But I maintain that the best way for a player to progress is by playing in his own age group.

Hugh McFadden is a good example. Last year, he got some senior games under his belt and it was good for him to play alongside more recognised players and learn from them.

Yet for his development, the run to the Ulster Final with the county Under 21s when he was one of the team’s star men, was just as important.

To me, he was getting the perfect balance, and to say playing in the Under 21 championship for the likes of Hugh was of no benefit is just wrong.

I still think the Under 21 championship is a very good competition, but it is at a congested time in the calendar. I feel the GAA would have been better leaving it as it was – warts and all – than changing it, as I don’t think it’s going to address the real issue of player burnout.

The decision to move minor grade to Under 17 is another unnecessary step. They say exams and school commitments are the reasons for change.

But from my own experience as Donegal minor manager for the last two seasons, when things are done properly, there are no real problems with it.

There will also be a lot more scrutiny on the Under 16 championship, which shouldn’t be as pressurised.

From a playing sense, ‘the mark’ has been introduced and fans of the old-school traditional game and high fielding will be delighted.

However, realistically will it make much of a difference? I don’t think so. Goalkeepers are so switched on now – and our own Paul Durcan is probably the best along with Stephen Cluxton – at finding ways of kicking the ball short and disguising their restarts.

If they wanted to see more high fielding, they should have introduced a rule where the kick-out has to go out past the 45 metre line, and then you probably would see more aerial contests.

My big worry is that it will just slow the game down even more. If a player makes a catch, particularly in a tight tense match, the first thing his opponent will do is try and delay him. The ball will be brought forward 13 metres, but that will be a small price to pay compared with letting a man get in behind your defence.

I have to say I really enjoyed Donegal’s match with Mayo last week. It was a real high quality match, played at the right tempo and intensity, and while there was no high fielding, there was still room for plenty of skills.

The Dublin-Monaghan game, and the Armagh-Fermanagh match were also excellent contests.

People are complaining about defensive systems, but I think we have seen over the last 12 months, that teams are investing more and more energy towards working on the attacking style of their play, and I think we are seeing that in matches.

I don’t think the current game is in that bad of a shape at all, but there are subtle changes that could and should be enforced like an improvement in refereeing performances.

Barry Cassidy was in charge of Donegal-Mayo last week and he wasn’t strong enough. He dished out far too many yellow cards for a game that was intense but not dirty. He could have spoiled what was an excellent game.

Rory Gallagher will have been very happy with last weekend’s result and three wins from three games is a super start to the year.

They are in a very good place and there is a lot of competition for places at the moment, which the Donegal manager must be delighted about.

When you look at the lads that came off the bench last week, you had Martin McElhinney, Anthony Thompson, Christy Toye, and Leo McLoone; and those lads are all serious players.

More and more in the modern game, we see teams looking to finish the match with their strongest team out, and it’s a fair argument that Donegal did exactly that last week.

They are finishing games strongly, and physically, they are flying at the moment. They have done a lot of work and you still have Karl Lacey and Colm McFadden to come into the set-up. When you add in those two and possibly Ciaran Thompson, there is the makings of a very strong panel.

Paddy McGrath has been outstanding this year so far. I watched Paddy in a running session in Ardara on a wet, miserable night in the first week of January, and I couldn’t get over his fitness levels.

He had hamstring injuries in 2015 and was based in Dublin, but now he is back at home and injury-free. He’s bombing up that pitch non-stop, and speaking from experience, I’m sure no corner-forward will fancy having to track him this year.

Ryan McHugh was the best player on the pitch last week in my opinion. He was fantastic at right half-back and kicked two superb scores.

Odhran MacNiallais landed a couple of nice points, and Rory Kavanagh delivered a big second half display. Neil McGee also got the upper hand on his tussle with Aidan O’Shea.

This week Donegal travel down to what the Kerry people call the home of GAA. 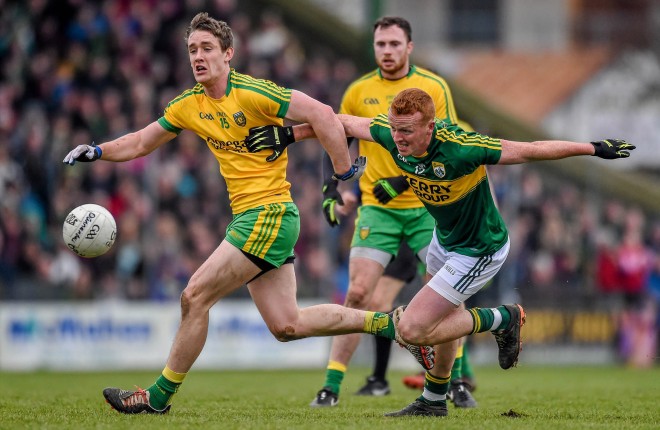 It will be a good test and Kerry are getting their house in order again, and the ‘Gooch’ and Donaghy were back in their side last week.

Donegal don’t have a good record in Tralee but they will go there with a great degree of confidence.

I know it’s early in the year, and you don’t want to be getting carried away, but the signs are good.

Rory will be happy with his lot, and things are coming together, but I’m sure trying to persuade Paul Durcan to commit to the set-up will still be high on his agenda.

The big game from a Northwest perspective this week is Tyrone’s clash with Derry. It will be a dress rehearsal for when the sides meet in the Ulster championship, and I’m sure there will be some markers laid down.

Derry lost to Galway last week, and the Tribesmen are a team that have caught my eye and I can see them beating Meath on Sunday at 1/2.

Mayo are winless after three games, but there were promising signs last week in Ballybofey and I’d expect them to beat Monaghan at 5/4 on Sunday.

I also see wins for Roscommon (1/4), and Dublin (2/9) this weekend. Anyone who followed my tip last week would have been quids in, and hopefully we’ll have more luck this week.