Unless you’ve been living under a rock, at some point this week, you’re bound to have had a discussion about the ‘Battle of Tralee’ last week.

Kerry set their stall out early, and with only two points on the board going into the game, they were going to make sure they picked up their second win of the campaign, at any cost.

They set their tone out very early in the match, and that was plain to be seen.

I spoke last week about the lack of a strong official in our game against Mayo, and again last Sunday, Eddie Kinsella was very poor.

People will say that it was a difficult game to referee, but it was only hard to handle because the Laois man didn’t stamp his authority on it from an early stage.

The chief protagonist in all this was Kieran Donaghy. He threw Michael Murphy to the floor early on, and the ref should have booked him, or issued a black card for a deliberate pull down. That would have laid down a marker that he wasn’t going to settle for any nonsense.

Every team will go as far as they are allowed to go. If a referee gives them an inch, they will take a mile. Players – from all sports – will do whatever it takes to win matches.

Players know from early on in a game how far they can push the boundaries, and when Kinsella didn’t act after the first melee broke out, there was always a chance another free-for-all would develop. 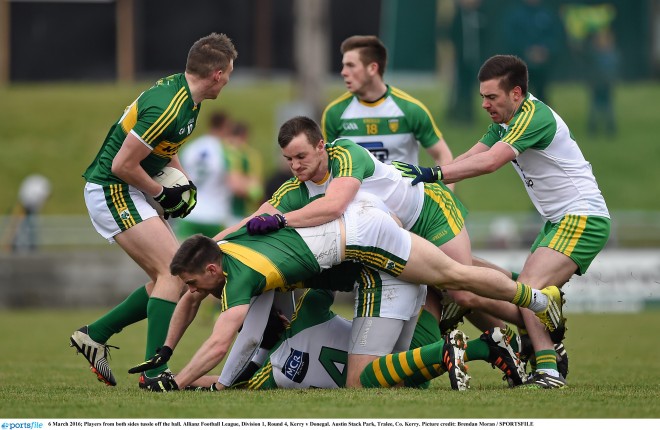 Granted, he sent off Alan Fitzgerald in the seventh minute, but after the full forward threw three punches, he didn’t have much of an alternative.

The Kerry players were cute and they knew after they went down to 14 men, that it was unlikely that Kinsella would send off another Kerry man.

Donegal, on the other hand, needed to be careful, as you often see that an official would like to even up the teams again, and Leo McLoone cost Donegal by losing his discipline last week.

McLoone received a watery enough red card for a strike on Aidan O’Mahony, but he was already on a yellow card anyway, and there was always a chance he would get the line once he got involved. Donegal have received a lot of negative coverage following the game and it was sad to see Kerry circling the wagons, so to speak.

I was disappointed with some of the tweets sent out by Paul Galvin and James O’Donoghue, in relation to the incident between Neil McGee and Fitzgerald.

Those lads have played the game and they know what goes on, and Galvin should remember he was no saint himself.

O’Donoghue’s comments were unnecessary, and you can be sure that the Donegal players will not forget them if they meet again down the line.

Neil McGee just didn’t decide he was going to grab the had of Fitzgerald. There was stuff going on from word go, and I believe Fitzgerald was put out to unsettle Neil McGee.

The Gaoth Dobhair man has been handed a one-match suspension, and I’d imagine he’s disappointed with that outcome.

Donegal were not innocent and played their part in the various scraps, but the tone was set by Donaghy, and if he was dealt with early on, the disgraceful scenes might not have ensued.

It was evident that Kerry were targeting certain individuals, and that’s something we encountered in the 2014 All-Ireland Final as well.

They were trying to antagonise Michael Murphy, and push Neil McGee around, and get at Rory Kavanagh. Players were singled out, like Ryan McHugh, who shipped a heavy tackle from Donaghy down the left flank in the first half, when the former Kerry captain had no interest whatsoever in attempting to win the ball fairly.

For all the talk of the great football Kerry play and their heritage and tradition; make no mistake about it, they are as cynical as any team when they want to be. They proved that again on Sunday.

There is a big rivalry developing between Donegal and Kerry, similar to the one we have with Mayo, and if things start to kick off, Donegal are not going to allow themselves to be pushed about or walked over.

Will we send an end to these sort of fracas breaking out? I doubt it.

Both the Kerry and Donegal County Boards have been handed hefty fines, but that’s not going to stop these melees breaking out. If you see your teammate being bullied by an opponent, you’re not going to hesitate and think ‘hold on what will the County Treasurer say?’

While I am critical of Kinsella’s performance, I don’t think the GAA is helping our officials.

People talk about the respect referees get in rugby but that is because players know where they stand. There are too many grey areas when it comes to the implementation of rules and that leads to complaints and appeals.

There is a gap in respect between players and referees and that’s not a good thing. That’s something that needs to be looked at.

The GAA hierarchy are always keen to chop and change at the rules, but sorting out the officialdom is a far more pressing issue.

By and large, I thought the incidents last week had an unsettling effect on Donegal. We are known for playing defensive game plans and winning tight games, but compared with some of the other teams out there at the moment, I wouldn’t say Donegal are a dirty team and you very rarely see them have someone sent off on a straight red card offence.

Donegal will have been disappointed to have lost the game when they were in a good position after half-time.

I thought Rory Gallagher’s team would have pushed on and that stage but they didn’t, and the goal was a killer.

There will be some positives for Rory to take from it, and his younger players weren’t intimidated in a hostile environment.

Kerry don’t like teams going down to Tralee and putting it up to them, and that’s what Donegal did. It’s sure to be interesting if the teams meet again later in the year.

Donegal will be hoping to get back to winning ways this week against Roscommon but it will be a difficult enough assignment.

Roscommon have been racking big scores up and they have won down in Cork and in Kerry.

They’re sitting on six points, the same as Donegal and whoever wins this week should get a league semi-final spot, while the loser will struggle to make it.

The game is being held in O’Donnell Park and there was a bit of controversy about that when it could have been played in front of two or three thousand more people in Ballybofey.

O’Donnell Park is a great pitch, and while we don’t have a good record there, the people of St Eunan’s deserve the opportunity to host the game.

I’ve been chatting to a few people from Roscommon this week and they will be travelling up in big numbers.

It’s a good test for their management duo of Fergal O’Donnell and Kevin McStay – two men I have great respect for. 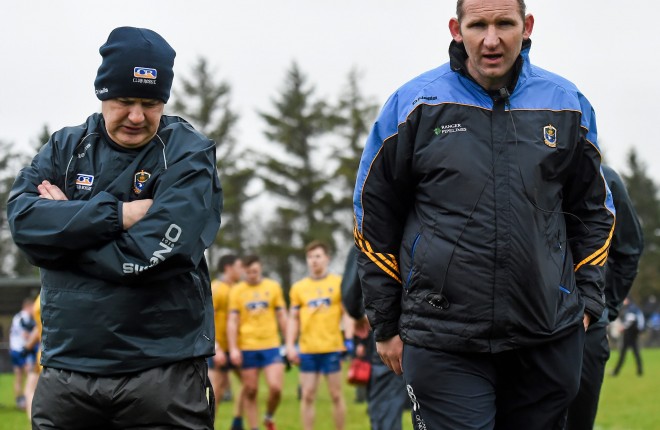 They seem to be a perfect fit for each other, and while the previous manager of John Evans was getting too far ahead of himself, the new management have settled things down and they’re going well.

It should be a tough game but I would still expect Donegal to win.

Our under 21 championship campaign gets underway in Ballybofey next Wednesday when we play Derry and from our point of view, it hasn’t been straightforward in terms of preparation.

We’re looking forward to it at this stage and the lads have done a fair bit of work over the last eight to ten weeks.

We’re missing a number of quality players, particularly in attack with Darach O’Connor, Rory Carr and Lorcan Connor all out.

But that gives others a chance to step in and make a name for themselves. Hopefully we will get a big Donegal crowd out to support us.

A last-gasp equaliser from Meath robbed Galway of a win last week and scuppered my bet at the death.