Fr Eamonn Kelly in the pulpit of St. Eunan’s Cathedral.

THE pulpit of the Four Masters and the altar rails in St Eunan’s Cathedral in Letterkenny are among the most important remaining works of the Dublin firm of James Pearse and Sons – founded by the father of rebel leader Pádraig Pearse.
The sculptor William (Willie) Pearse, with some help from his more famous older brother, spent time working in the Cathedral during its construction at the turn of the last century.
Both Pádraig and Willie were executed for their part in the Easter Rising of 1916. In Donegal, there is a special connection between the Pearse family and St Eunan’s Cathedral.
Mr Brian Crowley, curator of the Pearse Museum and St Enda’s Park in Dublin, travelled to Letterkenny recently to see first hand the pulpit and altar rails.
“The pulpit is one of the finest examples of work by Pearse and Sons, as a lot of their sculptures are no longer in existence. A lot of it fell victim to Vatican 2 when pulpits and altars were destroyed and altar rails ripped out. Thankfully, the Diocese of Raphoe decided to retain them,” Mr Crowley said.
Pádraig Pearse’s father James, a monumental sculptor, was born in London in 1839. He was brought to Dublin to be foreman of his monumental sculpture workshop at 178 Great Brunswick Street, before starting out on his own. He died suddenly in 1900 in Birmingham while on a visit to his brother.
They were, he explained, in the middle of the Cathedral project at that stage and it was finished off by the two brothers – Willie, who supervised the installation, and Pádraig who was involved in researching the pulpit.
“Because these were historical figures, it created a new challenge because they did not have anything to work from. Apparently, Pádraig went to research the Four Masters in the Franciscan archives and one of the Franciscans is meant to have sent a habit to Pearse as a reference to the costume they would have worn at that time.”
Fr Eamonn Kelly, Adm, St Eunan’s Cathedral, explained that the pulpit of the Four Masters was largely paid for by the National Teachers of Donegal. In the main, Sicilian marble was used, with ten statues in total; the Five Masters (for there were four plus one), the Four Evangelists (Matthew, Mark, Luke and John), and Isaias the Prophet.
The altar rails, comprising 23 columns, contain discreet symbols of the Passion (the hammer and pliers, the ladders, the sponge and lance, the cock, the scourges, three dice etc) which adorn the panels.
Another Pearse connection and the Cathedral is the stain glass window of Columbanus and Gall, by Beatrice Elvery.
“There was an amazing standard of artists working on the Cathedral. One of them Beatrice Elvery, of the famous sports shop family, worked for Sarah Pursher.
“When Pearse wrote ‘Áosagán agus sgéalta eile agus dánta’ to give students of Irish something modern to read, they were illustrated by Beatrice Elvery – so there’s another link,” he said.
Among the paintings in the former St Enda’s School, now the Pearse Museum, is one by Ms Elvery. Entitled Íosagán, it is prominently displayed in the entrance hall. 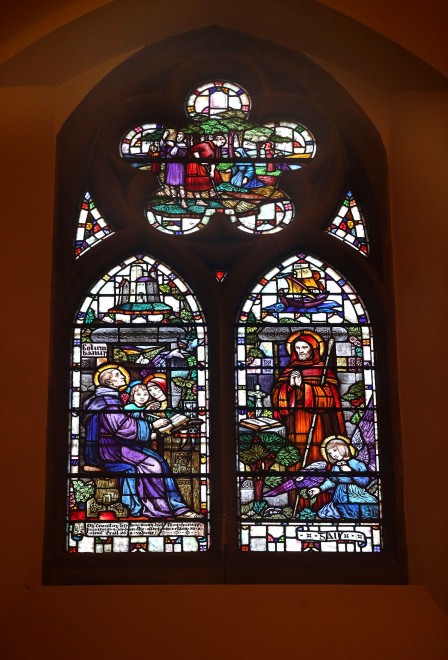 The stained glass window designed by Beatrice Elvery from the family who gave it’s name to the present day Elvery’s Sports chain.