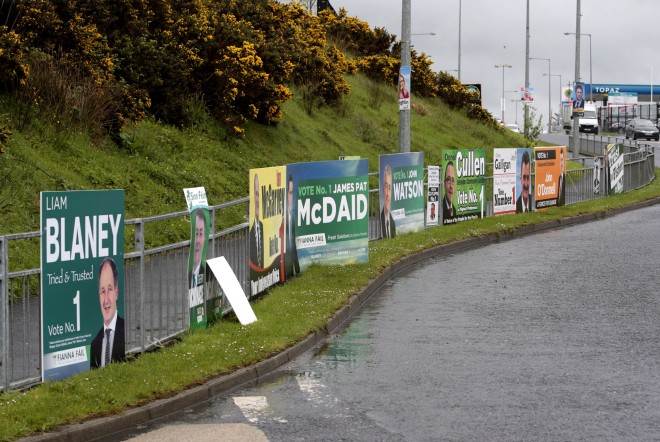 Election posters at the Mountain Top roundabout, Letterkenny, ahead of the last local elections.

IT’S all about the numbers. Sixteen candidates, five seats and just over two weeks left for canvassers to persuade voters in the new five-seat Donegal Constituency to give their candidate the nod.
Nominations for the election closed at noon today with Michael Mooney, Letterkenny against Water Charges, and Fís Nua’s Cordelia Nic Fhearraigh joining an already crowded field which includes Sinn Féin (3), Fianna Fáil (2), Fine Gael (2), Green Party and six Independent candidates. However, the deadline for pulling out of the election is close of business tomorrow, Friday.
This is the first time since 1977 that Donegal is a five-seater when Fine Gael (Paddy Harte and Jim White), Fianna Fáil (Hugh Conaghan and Joseph Brennan) and Independent Fianna Fail (Neil T Blaney) held sway.