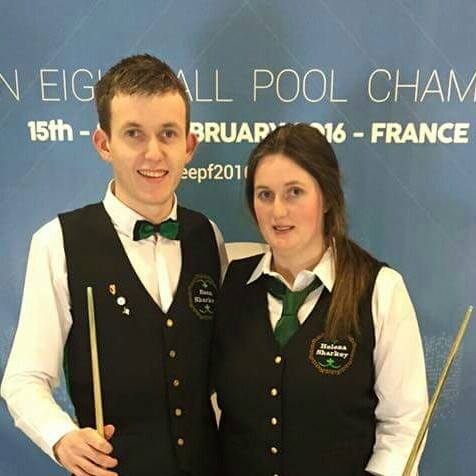 By Dermot Hegarty
DUNGLOE siblings Shaun and Helena Sharkey represented their country with distinction at the recent European Championships in Nantes, France.
Despite being only 24, Shaun is already a veteran on the international stage. Although the Irish men’s A team failed to make the knockout stages, Shaun was the leading Irish performer, finishing joint 7th in the overall statistics.
Helena was making her debut for Ireland in the ladies’ event, but took it all in her stride. In the group stages she finished 11th in the overall statistics. Better was to come in the semi-final, where Helena won all three of her matches in a titanic 8-7 victory over France. The final proved to be somewhat of an anti-climax though, with the English team proving too strong for Ireland and winning on an 8-3 scoreline.
Meanwhile, playoffs were held on Saturday for the remaining two spots on the Donegal A team. Dermot Hegarty, Glenties, and Shane Faulkner, Donegal town, were the two players to emerge from the pack.
The other players who had already qualified are: David Moore (captain), Shaun Sharkey, Johnny Connors, Tony Mulhern, Gareth Kirwan, Michael McLaughlin, Charlie Ruddy, Phelim McClafferty.