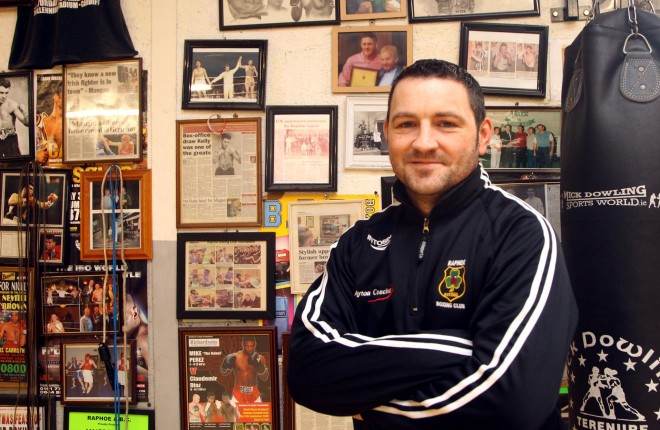 The motivational speaker Tony Robbins is attributed with saying that “Life is a gift, and it offers us the privilege, opportunity, and responsibility to give something back by becoming more,” but few have taken that advice on board quite as well as Raphoe Boxing Club coach Gary McCullagh.

The former Ulster Boxing champion will be found five nights a week in the Raphoe club gym and he chalks up miles upon miles then at the weekends travelling to tournaments, but it was a life-changing event that saw Gary set down the road to becoming a coach.

“It came out of the blue really, I got a call from Peter O’Donnell and he asked me to come in and coach and I had a big decision to make – but timing intervened.”

Having always wanted to have a go at professional boxing, Gary got back into the ring three years ago for a semi-professional bout that went well.

He was in good shape, a return to the senior ranks as an amateur was on his mind as a possibility – until that call from Peter and fate intervened.

“I had to choose whether I’d go back to box again or if I would start the coaching, then I got word that there was a date set for the kidney transplant operation.”

Gary’s son Christian had, at birth, been diagnosed with serious medical conditions including under-developed lungs, a leaking valve in his heart and was at the end stage of renal failure.

But Christian who is doing well and celebrates his 8th birthday tomorrow, has proven time and time again to the world what a champion fighter he is. Gary was only too delighted to be able to donate his kidney to his son in 2012.

“I was never going to box again after that operation and as it turned out, if I had gone back to box as a senior I wouldn’t have been able to make it through all the rounds anyway even if I was winning because of the way the dates fell, so it was great to come back as a coach, especially to the club where I had started, to my own local area.”

When he walked back in the door there were only around six boxers regularly training, the average on any given night now is 25 seniors, with maybe 30 more youngsters under the age of 10.

There is a history and real buzz around the place and professional boxer Jason Quigley is a regular visitor, but Gary says it takes a lot of work to keep everything going.

“It is hard to get people to come in as coaches, this is practically a full-time job but it is a voluntary position. I definitely couldn’t do it without the support of my wife Aileen, she has been brilliantly supportive because she knows the kind of time it takes between training and tournaments.”

The Raphoe club is synonymous with Donegal’s Mr Boxing, Peter O’Donnell and Peter’s son Paul and Gerard Keaveney also work with Gary coaching at the club.

“At the start we also had John Sweeney who is now in Canada and Stephen McBride from Strabane as well, but it is great to have Gerard and Paul here and hopefully over time we can get a few more.”

The club’s premises has become something of a community hub now with keep fit classes, the local football team training and even an art class there during the day, but stepping through the door there is never any doubt about the primary purpose.

“We do have members who come here and saying that they want just to keep fit. Sometimes when they are here for a while they say that they wouldn’t mind trying a bout, but if they are here to keep fit and we need the equipment they are using they have to step aside.

People know that right away when they come in, it is the same with the community things that we allow in the hall, a boxing event will always come first.”

The gym is a hive of activity and since Gary’s return to coaching has seen two All-Ireland champions returned. That , says the Raphoe coach, is always the aim.

“We are ambitious, having all-Ireland champions is always the aim, but they are not easy to win. Boxers need to put in the work as well outside the gym, they can train all they want in here, but the miles they put in outside will help the legs when they get into the ring.”

For Gary, moving up the coaching ladder now is also something he is hoping to achieve, but he says he is always learning and says boxers need to do the same.

“We had Jason Quigley here to speak to the young boxers and he said over and over again that you will get back from it what you put into it. You have to make sacrifices and work hard at anything to make it work.

Jason comes here regularly to train as well and there is always a buzz then, they all train harder, they all want to make an impression. It is good for morale but we can learn from that too. I was working with him on the pads on Monday night and I was learning as well, that’s what it is all about.”

The extra buzz in the gym also comes ahead of a tournament, when boxers know they are preparing for something and the Raphoe boxers are flat out preparing for their own tournament next month.

That means lots of work over the coming weeks for Gary and his fellow coaches, but he adds that working in the gym is one thing, stepping through the ropes though is quite something else entirely.

Stepping inside the ring can be a daunting prospect for the first time boxer and it’s something Gary says will help coaches determine whether someone is cut out for the sport.

“Once you put them into spar you will know who will be participating and who wont. You can be as good as you want, you can have movement, hand speed and everything – but once you get hit in the face, it’s what you do after that – that’s what will decide if you are a boxer.”