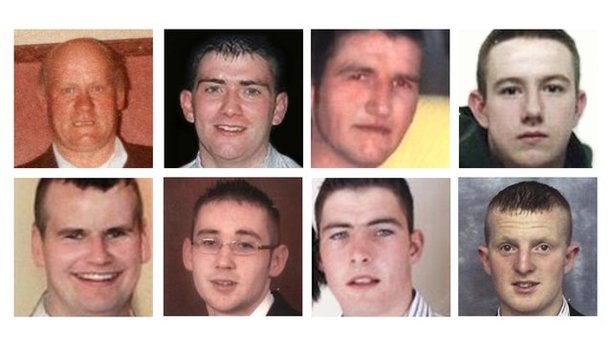 THE MAN who pleaded guilty to the deaths of eight people in the country’s worst road traffic collision says he’s ‘not responsible for causing the accident’, a corner’s court has heard.
A solicitor representing Shaun Kelly – who pled guilty to dangerous driving in the 2010 car crash – says his client does not accept responsibility for causing their deaths.
Kelly did not appear at the coroner’s inquest into the deaths, held at the Inishowen Gateway Hotel in Buncrana today, as he is currently serving a four year sentence.
Solicitor, Frank Dorrian, who represented Anne McGilloway – the driver of the first car that was struck by Kelly on the fateful night – told coroner Dr Madden that it ‘defies belief’ to say that somebody is not responsible for the accident in the coroner’s court, after pleading guilty.
Mr Dorrian said Kelly pleaded guilty at the circuit court and when his case was brought to the court of appeal he did not deny responsibility for the accident.
The court heard evidence from Public Service Vehicle Inspector John McDaid who told Dr Madden he inspected all three vehicles involved in the crash on the night in question – Shaun Kelly’s black Passat, Hugh Friel’s Red Toyota and Anne McGiloway’s silver Renault Meganne. He said all three cars were in a serviceable pre-accident condition, except Ms McGilloway’s vehicle’s right headlight was defective and a her front left tyre was excessively worn.
The court also heard Ms McGilloway’s NCT had expired by two weeks.
He said none of the seatbelts in Kelly’s car, which was extensively damaged, didn’t appear to have been used.
Mr MacLochlainn asked Mr McDaid why no prosecutions had been brought against Ms McGilloway in relation to these matters.
Stephen Byrn, a barrister representing the Garda Commissioner accused Mr MacLochlainn of ‘throwing muck around’.
He said: “For Mr MacLochlainn to continually characterise me who has come down from Dublin to represent the Garda Commissioner to ‘cover up’ it shouldn’t be allowed.”
After lengthy legal debate, Ms McGilloway gave her deposition, which outlined that she had been at bingo on the night in question, in Buncrana, and upon her return home to Clonmany, she overtook Hugh Friel’s car. She described the late Mr Friel as a ‘slow driver’.
She said she drove around 40 to 50mph.
She said she saw Kelly approaching her from around the bend she said it was coming ‘terribly fast’ on to her side of the road when she saw Kelly steer the car back to his side of the road.
Mr MacLochlainn asked Ms McGilloway, if her vehicle was over the white line because she couldn’t see the ditch. She said it wasn’t.
Mr MacLochlainn put it to her that she was over the white line, to which Mr Dorrian told his client she did not have to answer the question.
The inquest continues.