Advertisement
HomeSportGAADECLAN BONNER: Expect the test to be tougher this week
Advertisement

Donegal picked up two valuable league points last Saturday with a comprehensive victory over Down.

You would have to question the quality of the opposition but you can only beat what is in front of you.

I’d imagine Down will be very disappointed with their performance and their manager Eamonn Burns will be scratching his head because they were so flat. They didn’t appear to have any system or game plan.

Donegal looked lively and sharp and they won every battle on the field. Michael Murphy delivered a masterful kicking performance and when he’s in that kind of form, anything inside 50 metres, whether that be a free-kick or a line ball, is in the range of the big Glenswilly man.

Patrick McBrearty was also very lively, and he produced another fine performance for UU in the Sigerson Cup on Tuesday.

I think McBrearty is going to be a really key player for Donegal this season. He was thrown in at the deep end when he was 17, and although this is his sixth season, he is still only a young man. Let’s hope he can keep his super form going because there is no doubt that he has all the attributes to be one of the top players in Ireland.

I was surprised the Down corner-back Darren O’Hagan was left on him for the whole match last week, and the Kilcar man showed the damage he can do.

It was a good team performance right through and a lot of the younger lads looked at home. Ciaran Thompson is definitely stepping up now, and Michael Carroll was bright, although it will take his time to find his feet. He is just out of minor team and you can’t expect much from him at this point of his career, but he is progressing well. 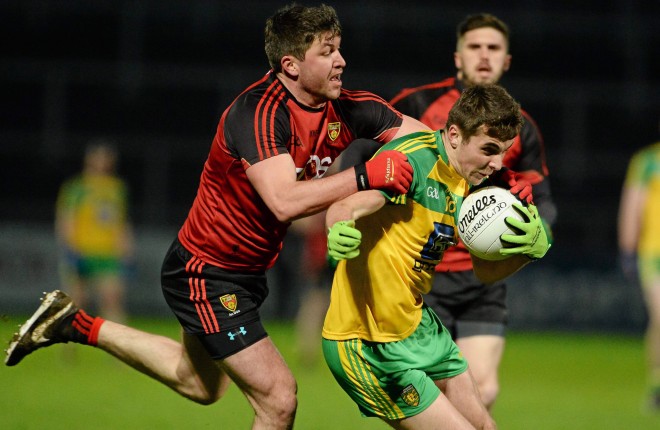 A few of the older lads got a run out, and they will be crucial if the county are going to enjoy a long summer this year.

Rory Gallagher will have been happy with what he saw last week, but it is sure to be a stiffer test this weekend against Cork.

The Rebels beat a depleted Mayo team last week, and while that didn’t surprise me, Peader Healy’s team looked more than decent. It will be a good test in Ballyshannon.

Looking at the match last year, Cork were poor and didn’t bring the fire you would expect. This weekend they will arrive with confidence and it should be tight match.

Cork don’t generally do well in Ballyshannon and I expect Donegal to win the match on Sunday.

The team are heading off to Tenerife on Sunday week for a training camp, and they will want to head away with four points on the board.

Derry on the rise

Derry came back well against Fermanagh last week in their NFL opener, and beat them comprehensively, with an impressive second half performance. Damian Barton is doing a lot of work with the Oak Leaf county and their confidence will be gaining momentum.

Tyrone got their season off to a good start with a hard-fought win against Cavan. The Breffni county came with a defensive game plan and it was a low-scoring game, but Tyrone managed to grind it out.

The Ulster champions Monaghan had a difficult game away to Roscommon, and they came good in the closing stages to take the points.

There does look to be a gulf in class in Division 1 and it is hard to see anyone other than Roscommon and Down being relegated this year.

Dublin also laid down a marker last weekend with their victory over Kerry. Neither side had their full quantity out, but the strength-in-depth that Dublin enjoy is just unbelievable.

Kerry have won the last two All-Ireland Minor titles, but there aren’t too many players from those teams breaking through.

You’re never quite sure where Kerry are. Two years ago, I thought they were in a state of transition, and they went on to win the All-Ireland, and lose the next final.

Killian Spillane – nephew of Pat – is involved in the All-Ireland Junior Club final with Templenoe and it will be interesting to see if he is called in over the next couple of weeks.

Eamonn Fitzmaurice is content to bide his time with those successful minors, but an infusion of youth would probably do Kerry no harm.

Mayo got off to a bad start under new manager Stephen Rochford, but that result was overshadowed by the concussion controversy involving Lee Keegan.

The wing-back collided heads with Eoin Cadogan after a thunderous challenge, and the Cork man was pulled off immediately.

Keegan was allowed to stay on the pitch for ten more minutes when he clearly wasn’t right and it was quite a dangerous situation he was in.

There has been a lot of talk in the media about concussion in recent times, particularly relating to rugby, but it is also something that is an issue in GAA.

Our own doctor Kevin Moran is monitoring a lot of head injuries for Croke Park, and he has stressed the importance of following the proper protocols.

Players never want to go off the field, but it is not up to them, or the managers. That is a decision for the medical team, and if a player has any symptoms then he has to come off.

People might say that it should have been an easy call when Mayo were on their way to a defeat anyway. But that kind of thinking shouldn’t enter the fray.

If someone is concussed, then they have to be taken off, whether that be in the final the minutes of the All-Ireland final or a meaningless pre-season challenge game.

We had a good week on the betting front last week, and hopefully, our luck will be in again this weekend.

Donegal have a very good record at home and I’m going to back them to beat Cork, alongside Kerry, Monaghan, and Armagh.