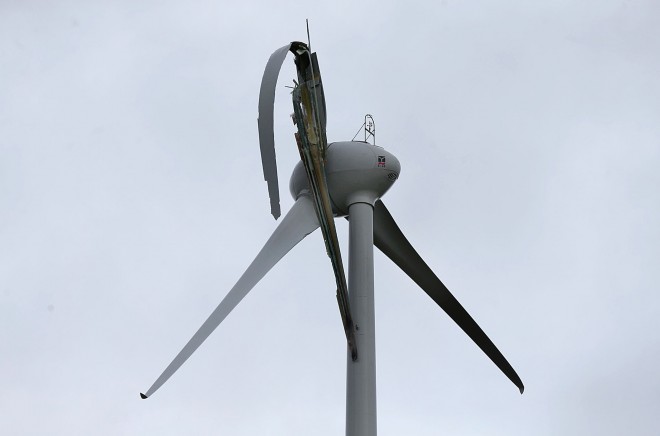 A NUMBER of investigations are believed to be underway after a blade on a huge wind turbine near Drumkeen “disintegrated” at the weekend.

The incident occurred at the Meenanilta Wind Farm some time on Thursday night or in the early hours of Friday morning. The blade on the 60 metre (196 ft) high turbine appeared to tear apart. It is located around 100 metres from the nearest public road.

A spokesperson for the current owners could not be contacted this morning. However, a director of the original developers, Dublin-based Redwind Energy Ltd, said it owned a site nearby and believe the turbine in question was struck by lightning.

A specialist crane is in the area and repairs are expected to begin today.

Meanwhile, a spokesperson for the Finn Valley Wind Action (FVWA) group, which is opposing plans to build Ireland’s biggest wind farm in the area, has called for a full investigation.

“A full, public investigation and report needs to be launched immediately into the turbine failure where the blade disintegrated on a turbine near Cark Mountain – the debris from the blade was dispersed in the area,” the spokesperson said.

“Clearly, this highlights safety concerns, raising the issue of setback distances from homes. The investigation is vital to identify the cause of the incident, could it have been caused by high winds, lightning or whether mechanical failure?”

The group also called for clarity on whether or not other turbines on site are safe and that they should they be shut down until the cause is identified.

“We are aware of many issues regarding wind turbine failure, however, this if often kept out of the media spotlight – it is time to ask how often does this really happen and why and is anything being done about it. The proposed Carrickaduff Windfarm in Finn Valley has turbines up to 50 metres higher and closer to homes than the ones in Drumkeen. We need our politicians to provide leadership and not allow us to be led by the Irish Wind Energy Association (IWEA) down this path of pure folly.”