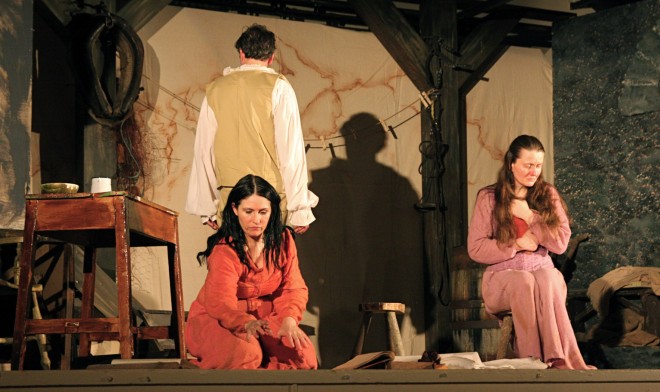 THE Butt Drama Circle (BDC) will take their production of the Brian Friel’s classic, Translations, to the Balor Theatre next week.

The play opened in Glenties last Friday night, four months after the death of the acclaimed playwright.

Directed by JC Bonar, Translations will also run for four nights from next Wednesday, February 24, at the intimate Balor Theatre in Ballybofey, before touring the regional heats of the All-Ireland Amateur Drama Festival.

As a mark of respect, the play opened in Glenties –  the origin of the fictional Ballybeg and his final resting place.

Impressively, BDC is one of only two theatre groups to have a licence to produce a Brian Friel play this year. Interest in the forthcoming play has been huge given as it will be one of the first productions of a Friel play in Ireland since his death in October.

Translations was the first production of the legendary Field Day Theatre Company which was founded by Friel and Stephen Rea.

Set in hedge school in the townland of Ballybeg in 1833, Translations traces the impact a department of British Army Royal Engineers has on the Irish speaking community there.

Initially, the engineers are simply charting the local countryside and anglicising the native Irish place names for the Ordnance Survey. Assisted by Owen (Shaun Byrne) – son of the local schoolmaster – they are perceived to be harmless, even friendly, and are welcomed by the townspeople for the most part.

One of the engineers – Lieutenant Yolland (Fionn Robinson) – becomes especially captivated both by Irish culture and by local girl Máire (Cathleen Bradley) – who is also the object of the affections of the schoolmaster’s son,  Manus (Pauric Gallagher).

When Yolland disappears, the engineers’ presence takes a sinister turn as they rampage across Ballybeg, threatening to shoot livestock, evict villagers and destroy homes if he is not found and the Colonial character of their actions becomes clear.

In the ensuing events, everybody will have cause to examine their culture, their roots and their heart.

Mr Bonar revealed how the move – which has turned out to be timely – to bring Translations to the Balor boiled down to “almost fate”.

“The decision was made last year to bring Translations to the Balor. We first produced it in 1986 on the amateur circuit around drama festivals.

“I made the decision to stage the play last March and set my sights on doing it this year. When we decided to stage the play there was no word that Brian Friel was even sick. We were granted the rights to do Translations before his death. It was almost fate.”

Also cast in the upcoming play are Marina Marcinetova as ‘Sarah’, Jim Holohan who plays ‘Jimmy Jack, Pauric Duffy as ‘Doalty’, Esther McCorkill as ‘Bridget’, Jim Sweeney as ‘Hugh’ and Gerry Doherty, who plays the part of Lancey.

Translations will run from Wednesday, February 24 to Saturday, February  27 at 8pm. For information and bookings, contact the Balor Arts Centre on 07491 31840 or log on to www.balorartscentre.com