The death has taken place of the Dean John J Silke, retired Parish Priest of Glenswilly and Diocesan Archivist on Wednesday, January 13, in hospital in Putigano, Italy (Bari Region).

Born on May 7, 1926 in Creeslough, County Donegal,  he was ordained on June 22, 1956 in Maynooth by Archbishop John Charles McQuaid.

Dean Silke received his primary education in Drimnaraw and Massinass National School, Creeslough. He went to St Eunan’s College, Letterkenny for his secondary education and to St Patrick’s College, Maynooth from where has was ordained to the Priesthood.

Chaplain to Sacred Heart Convent, Leeson St., Dublin from 1952-1955 whe is studied at the History School in University College Dublin. From 1956-1957 he had a research Scholarship at Salamanca, Spain.

His remains are reposing at his nephew’s House, Sean Gibbons, in Creeslough, from 6pm today (Tuesday, January 19) and on Wednesday.
Funeral Mass on Thursday at 12 noon in St Michael’s Church, Creeslough, with burial afterwards in Doe cemetery. 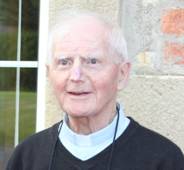