The move followed a number of heated exchanges between Cllr., McBrearty Jnr and newly-appointed chairperson of the group, Sinn Fein councillor,  Gerry McMonagle.

Discord arose at the outset when Cllr McBrearty called for the meeting to be suspended, warning he had written to the Minister for Justice and Equality, Frances Fitzgerald, TD., to raise his concerns over Mr McMonagle’s election as chairman of the body.

Mr McBrearty Jnr  said he did not believe the body was acting in a  “transparent” or accountable” way. His request to adjourn the meeting was turned down.

However, further disruption ensued when fellow Independent councillor, John O’Donnell, entered the meeting causing Cllr McBrearty Jnr to demand he be removed from the committee until all current investigations arising from the RTE Investigates – Standards in Public Office programme have been concluded.

After more than twenty minutes of fiery exchanges,  JPC members voted in favour of asking Cllr McBrearty Jnr to leave the meeting, to which he agreed.

However, addressing Cllr McMonagle, he retorted: “I’ll remove myself from this meeting but it is clear there is no accountability here.

“I want it put on record that I have been put out of the chamber by someone who has serious questions to answer.”

This afternoon’s  meeting, in County House Lifford, was the first meeting of the body after calls were made late last year to have the group reconvened.

The next meeting of the JPC takes place in April. 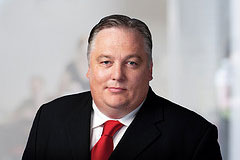