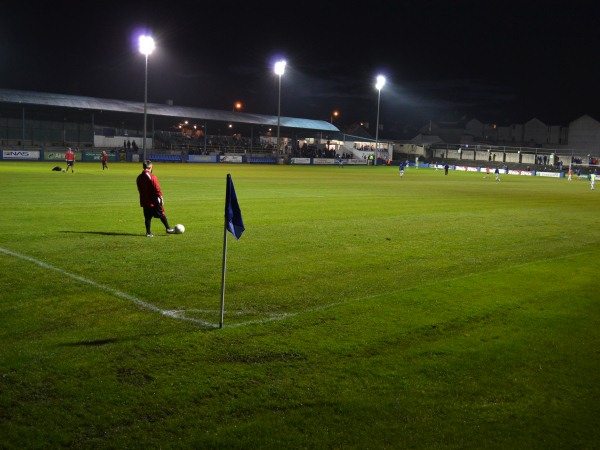 FINN Harps Football Club has again teamed up with Donegal County Council to assist in the promotion of Road Safety in the County.
THE CLUB have offered the Donegal Road Safety Working Group a free advertising hoarding in Finn Park to continue its ongoing commitment to raising the awareness of the dangers on our roads.
Finn Harps will be playing in the Premier Division this season and this will be the first time since the Primary School Art competition was first launched that Finn Harps will be playing in the top division of football in Ireland. Finn Harps will begin their Premier campaign with an exciting North West derby game against Derry City at Finn Park on Friday 4th March and the winners of the Art competition will be announced at this game.
The Road Safety advertising hoarding will be designed by a student from one of the county’s Primary Schools through an open art competition. The competition was officially launched in Lifford by the Chief Executive, Seamus Neely, Director of Roads, John McLaughlin, John Campbell, Kevin McHugh Finn Harps F.C., Grace Ann McGarvey, Grace Ann Consultancy, teachers and schoolchildren from St.Columba’s N.S., Ballylast, Castlefinn.
Speaking at the launch, Brian O’Donnell, Road Safety Officer said, “We are delighted with the continued efforts of Finn Harps Football Club to help us promote greater awareness of the dangers on our roads. We had over 700 entries from Primary School children last year. It is fantastic that such high numbers take part and we hope that all who took part will have an increased awareness of road safety. I would like to thank the teachers for their help in promoting the art competition”.
Entries must be original and the applicant’s own work and should be on paper no larger than A3 size. Details are currently being sent to all primary schools in the county and the competition has a closing date of the 12th February 2016.