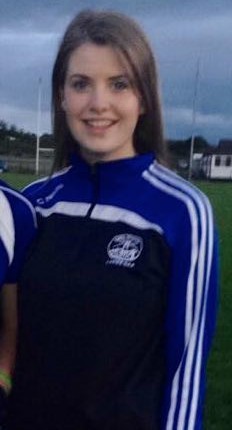 If you were throwing a party and you could invite anyone in the world, dead or alive, who would you ask around?
Will Ferrell, Jennifer Lawrence and Davy Fitzgerald.

Where do you like to go out to celebrate after a big victory? Keep it local in Fanad, then on to Voodoo Bar

Any odd items in your kit bag? A large amount of tape.

Who’s the biggest joker in the team you play for? Shona Rogers and Róisín Carr (Dearg) are quite the entertainers.

Which team mate has the best looking other half? There aren’t too many to choose from!

Who is the worst trainer? Aisling McDevitt always has an excuse for getting out of sprints. The best are probably Mairead Coll and Aisling Howe, they are both seriously competitive against each other at training.

Who spends most time in front of the mirror in the dressing room? Róisín Carr (Dubh), always fixing her hair!

Who’s the best/worst person to sit beside on the team bus? Worst would have to be chatterbox Hannah Shiels although it doesn’t matter where you are sitting you will still hear her!! Best- Orla McGonigle, it’s always tactical talk with her.

Who has the best and who has the worst diet on the team, and what does it include? I don’t know anyone that eats extremely healthy or unhealthy.

Best or worst quote you’ve heard, either from a manager, player, opponent? “You only Achieve what you Believe” has to be up there!

Best ever performance? Our U14 Division 1 win over St.Eunans in Milford. Will never forget it.

One to forget? I learnt from them all.

Sporting ambition? A major win with these bunch of girls.

When you were playing in the back garden, who did you pretend to be? Frank McGlynn