THE first distillery in Donegal in 174 years is to be constructed on the slopes of the Sliabh Liag sea cliffs.
The Sliabh Liag Distillery will be operated by James Doherty, whose mother is a native of Kilcar, and Carrick woman Margaret Cunningham and the company has launched its first brand, ‘The Silkie’, a blended Irish whiskey.
The distillery, which has been costed at between €4m and €8million, will lead to the creation of in excess of 20 jobs at full production.
Mr Doherty is a former Managing Director of International Marketing for Tullamore Dew and William Grant and Sons, Glenfiddich. He moved to Straleel in Kilcar last year.
“The deposit is down on the equipment with Forsyth’s in Scotland and the architects are working on the building design at present. The site is at Clogher on the road between Carrick and Glen and we hope to have the plans submitted with the Council by the end of this month or in March. All things being equal we’ll have diggers on site before the end of the year and we’ll be producing whiskey within twelve months,” Mr Doherty said.
Ms Miriam Mooney, Head of the Irish Whiskey Association said the revival of the Irish whiskey industry is being felt across the island of Ireland.
“The announcement is another sign that the Irish Whiskey industry is moving confidently towards double digit export growth by 2020. With the Irish whiskey industry exporting to 77 countries, great Irish brands like this will continue to be experienced through our high quality whiskey products.
“Bord Bia recently said that the best performing category in terms of exports growth was the beverage sector, largely driven by sustained growth in exports of Irish whiskey, which recorded export growth of 18 per cent,” she said. 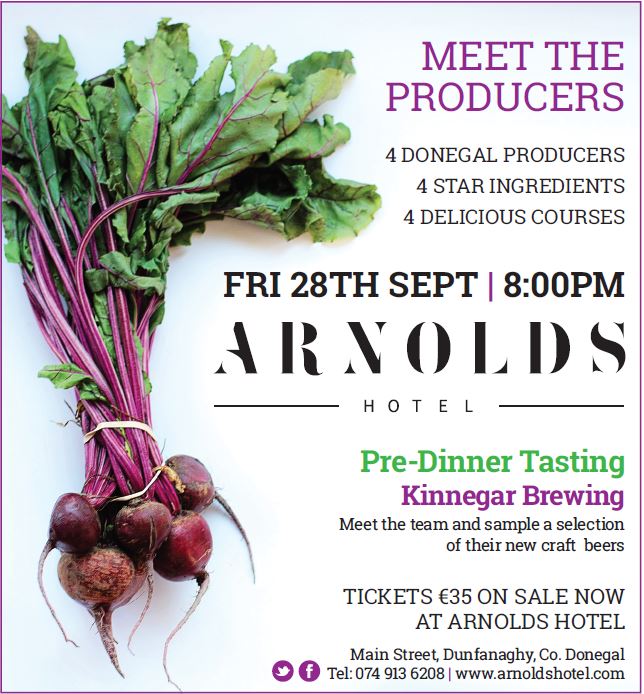 Dunfanaghy gets ready to serve up its third annual food festival!

The popular seaside village of Dunfanaghy in North West Donegal will host its third annual food festival on Friday...