There was great news for Donegal this week with the announcement that Rory Kavanagh is set to return to the Senior Squad. It is a huge lift for the squad and there is no doubt that Rory Kavanagh from 2010 to 2014 was one of the top midfielders and wing forwards in the game and of course he was a key player in the two Donegal teams that got to two All-Ireland finals and won three Ulster titles.

It is great to have a player of that calibre to come back in, it will be a lift, not just to the players but to the whole backroom team as well and everybody involved.

From that perspective it is good to see Rory back, but it is always difficult when you take a year out, especially when you are 32/33. Even though you might feel yourself that you are in physically good shape, it just takes that wee bit longer to get back but I presume come championship time Rory Gallagher will be hoping – if he can stay free from injury – that Rory Kavanagh will be a huge asset, especially since there are a lot of younger lads coming through now.

And certainly in that regard to have a player available with the likes of Rory Kavanagh’s leadership qualities in the dressing room will be vital to Donegal this year.

When you look at the McKenna Cup campaign we introduced a lot of younger lads, a lot of U21s and it was a good learning curve for these lads, but when you look at three matches I think that going forward for this year it is going to be much of as you were for Donegal if they are going to progress.

When we look at the McKenna Cup it is also interesting to look at what Rory might have learned over the three games.

We started well against Down, we had a reasonable performance but last Sunday’s game was disappointing as indeed was Wednesday night’s game against Fermanagh.

We did introduce an awful lot of young lads and we need that, for the development of those young lads we need to have them in and part of that squad, but those lads will know that it is a different level. It is senior football now and they have to continue to work.

Will they all make senior inter county footballers? It is very difficult to know, it is the boys who will work hard, put the head down and who want to learn and want to improve as they go on, they will be the players who will make it eventually. 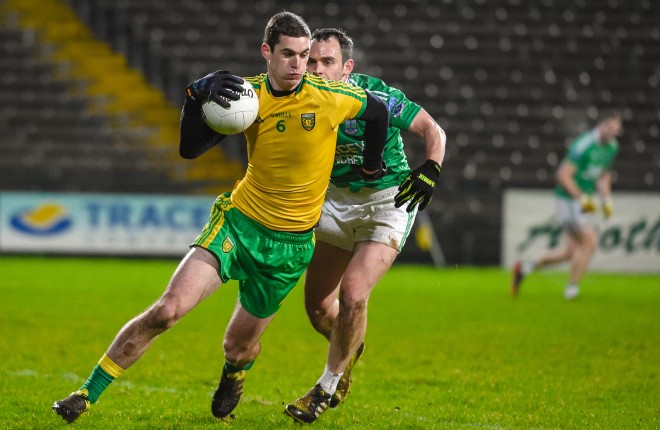 Attitude is a huge thing and having worked with a lot of those players I know their attitude is top class. I think the future for Donegal football is good. It may take some time and a transitional period to get those young lads bedded in properly, but games like they have had over the past couple of weeks will have done them no harm.

Some of them will return now to the U21s and we have a game this weekend against Mayo in O’Donnell Park and it will definitely strengthen our hand a bit now.

We ended up getting beaten by Fermanagh last week by giving away two very soft goals but we will have a nucleus of senior lads back in action again this weekend and it will be a very good test for us against a very god Mayo side who won the All-Ireland minor title three years ago.

They are one of the fancied teams to win the U21s so that should be a very good test for us this weekend. As our build-up continues for the U21 championship, a competitive match at this time of the year is vitally important to see where we are at.

It is also an opportunity for some of the lads to stake a place, not just in the team, but even in the squad. There are squad places there still up for grabs.

That said, while we welcome back some of the lads who were involved with the seniors, we are mindful as well that there is a lot of demands on these lads.

Colleges are looking for them, we’re trying to get them, the seniors are looking for them and it is something that needs to be worked out between the colleges managers and the various managers for the development of the players. There is no way that the players can be out playing seven days a week, they do need their rest, they do need recovery time.

As for the seniors, well as we are now at the end of the McKenna Cup campaign I still think Rory would have liked to have had a few more matches under his belt ahead of the league. We will touch more on the league in next week’s article but the away match against Down is a game that you’d probably expect to get two points from.

It is always important to get a couple of points on the board early on, so that is a match that I would say that Rory will put a massive emphasis on to get those two points.

Looking at the rest of Ulster, it is early days yet and there has been a lot of experimenting but Fermanagh seem to have hit the ground reasonably well again after a successful year last year. Talking to people last weekend I know they have put a huge amount of work in, not just at seniors but at underage as well and Pete McGrath is also involved at U21s. I think that they will cause problems for teams this year.

Tyrone have again taken the competition very seriously and their game with Fermanagh will be an interesting game at the weekend. It is no real surprise that Tyrone is still in there, Mickey Harte takes all these competitions fairly seriously and he likes to keep that winning mentality in the group of players and I think they will also be a formidable force this year as well.

Since last week’s column was penned we have had the U21 final here in Donegal and I certainly think that playing the U21 Championship final in January certainly undermines the competition and I think it needs a proper place in the season.

Last week’s final was a great success for Kilcar who overcame St Eunan’s and got revenge for last year’s defeat. It was a good performance from Kilcar, they were the better side on the night and they definitely deserved to win it.

Now they go on to play in the Ulster U21 Club Championship and from our point of view there are a number of U21s and seniors involved from the Kilcar club and again the timing of it is difficult because some of these boys are playing Sigerson, some are playing other colleges football or U21 or senior with the county.

The timing of this means that there is an awful lot of football for a lot of these lads in the month of January. It’s definitely something that needs to be looked at going forward.