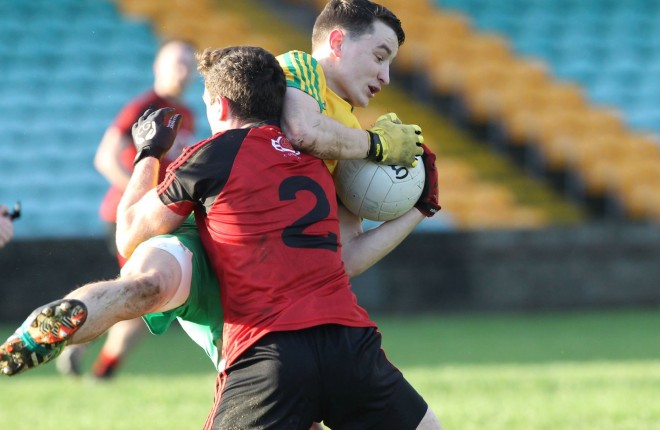 Donegal’s Eoin McHugh in action against Down last week.

Donegal are hoping to do well in this year’s McKenna Cup and they made a good start when they recorded a solid win over Down in MacCumhaill Park on Sunday.

There might have been only three points in it at the end, but it was much more comprehensive than that and Donegal were never in any danger of losing the match.

I’m sure Rory Gallagher will have been pleased with what he saw especially from the young lads he handed debuts to.

I thought Eoghan ‘Ban’ Gallagher put in a good shift at wing-back, as did Stephen McBrearty and Michael Carroll in the half-forward line.

Jack O’Brien was very solid at corner-back and looked assured going forward, while Danny Rodgers had a fine 70 minutes in goal and that will do him the world of good.

Ciaran Thompson was probably the most impressive of the lads making their senior bow and he kicked three splendid points in a man-of-the-match performance.

There were a handful of senior players on hand to show them the ropes, and as always, Frank McGlynn led by example.

Paddy McGrath won every ball that came into him and he looks in very good shape for the time of the year, as does Martin O’Reilly, who was sharp at number 6.

Another man to catch my eye was Caolan Ward. He had a very good club championship with St Eunan’s and he carried on that good form on Sunday, and showed that he can kick a point if needed to as well.

Cillian Morrison – who is best known as a League of Ireland striker – came on at the end of the game and it will be interesting to see how he develops over the next few months.
He hasn’t played GAA regularly since he was 18. He was a really promising player for St Eunan’s at that stage in his life, and Jim McGuinness thought enough of him to play him in his under 21 team that reached the All-Ireland Final.

That’s the guts of six years ago now, and while he has featured once or twice for Eunan’s, he has played very little gaelic football in the intervening years.

You can’t just switch it on, and it will take him a few months before he comes back to anything like the standard he was at six years ago.

If he does develop well, he could be a very useful addition to Donegal. We’re not blessed with a lot of inside forwards, and he has got the type of pace that really worries defenders. He also has a knack of finding the net. Hopefully, he will have a part to play in the summer months.

Donegal play St Mary’s on Sunday and while they have good inter-county players like Conor Meyler (Tyrone), Ryan Johnston (Down), and Paddy McBride (Antrim); they won’t be world-beaters.
Paddy Tally – who coached Tyrone to the All-Ireland in 2003 – is in charge of ‘The Ranch’, and they will come with a game plan, but you would have to expect Donegal to have too much for the Belfast college.

A piece of good news this week was the announcement of the county’s new shirt sponsors.

The ‘KN Group’ have come on as the new title sponsor, while the MCR Group will be the Tier 2 sponsors on the back of the shirt.

This is a very good bit of business by the County Board and huge credit must go to the top table, especially Ceiran Kelly and Sean Dunnion for getting the deal over the line.

The KN Group are a big company with over 1400 people working for them. There is also the possibility down the line that they could offer employment to some of our inter-county players, which would be brilliant.

Fair play to Donagh Kelly for coming on board. He’s well known as a rally man around the county, but he is also a good supporter of Donegal GAA. He’s putting his money where his mouth is and we should appreciate that.

The MCR Group and their director Donall Barrett have invested a lot of money in the senior team in recent years and it is great that they will continue to do so.

It sounds like it is quite a lucrative deal, so credit must go to the County Board for securing it.

Jim Gavin confirmed this week that his full-back Rory O’Carroll has withdrawn from the Dublin panel, and that leaves the manager with a big hole in his defence.

Good full-backs don’t grow on trees, and it was a problem position for Dublin for years before O’Carroll came on board.

O’Carroll is in the prime of his life, but he is not your typical GAA player and he has a very active life outside of the game.

There does not appear to be a ready-made replacement so Gavin will have to get his thinking cap on. He could move Philly McMahon to full-back, but he will lose his ability to drive forward then.

There won’t be a simple solution for Gavin, and I’m sure there would have been more than a few inter-county managers with a pep in their step when they heard that Dublin will play the 2016 season without one of their most influential players.