Advertisement
HomeSportGAADECLAN BONNER: Donegal to get the result they desire
Advertisement 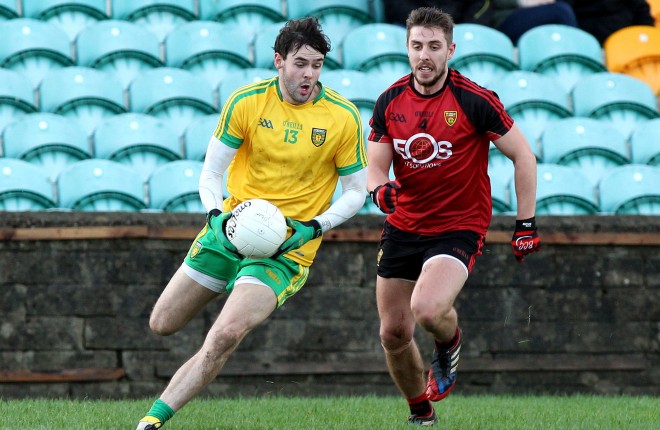 Odhran MacNiallais, Donegal in possession against Ryan Boyle of Down in the McKenna Cup clash Photos: Donna El Assaad

THE National Football League gets underway this Saturday in Newry and the number one priority for Donegal will be to consolidate their position in Division 1.

It’s a strange competition in the way that the majority of the teams that compete in it have no real interest in picking up the silverware.

There are bigger prizes at stake later in the year, and the league won’t make or break your season. However, relegation to the second tier does not leave you in a great position heading into the summer months.

I feel it’s important that Donegal stay up in Division 1 because the best teams are there, and you need to be challenging yourself against the cream of the crop.

From a financial point of view, it’s is worth an awful lot more to be playing in the top tier. The gate receipts are always a lot higher when Dublin or Mayo come to town, than for a Division 2 side.

Rory Gallagher has said that he will introduce fresh faces this year, and you can expect three or four men to make their league debuts on Saturday night in Newry.

Traditionally, we have not been great travellers in the league, and we have four away games this year which is far from ideal.

We will travel to Killarney to play Kerry, and we have always struggled in the Kingdom.

Our last two matches are against Dublin and Monaghan, and you wouldn’t want to be going into those games needing points, because they will be very difficult contests.

On paper, our best chance of getting a result away from home is on Saturday night in Pairc Esler.

They have struggled over the last year, and it is a game that Rory Gallagher and his management team will expect them to win.

Home form is crucial in the league and we are unfortunate that we only have three games in the county this season.

We have Cork in Ballyshannon, and that has been a good fixture for us. We beat them in Fr Tierney Park last season, and you’d have to fancy our chances of doing so again this season.

It is not an outlandish suggestion to say we should have four points on the board after our first two games.

The senior team will then head to Tenerife for a training camp, before facing Stephen Rochford’s Mayo after the break.

Mayo have a severely depleted squad at the moment through injuries and club commitments, but they may be stronger by the time their fixture with Donegal comes around. It will be a tough tie, but in MacCumhaill Park, Donegal should be picking up the points.

We also have Roscommon in Letterkenny, and while Kevin McStay and Fergal O’Donnell’s team could be a side to watch in the league, I’d expect us to take maximum points from that contest.

Eight points is the magic number as that tally will keep you up, and also potentially get you a semi-final spot.

Donegal were out early in last year’s championship, and their league semi-final with Cork was more of a hindrance than a help.

However, they will make their entry into the Ulster Championship four weeks later in 2016, so an outing in Croke Park would be more welcome.

It’s nice to get a few wins under your belt early in the year, and even better if you can take a big scalp on the way, but progression in the league will not be at the top of the agenda.

Introducing new players will be important, and this will be a step up for the young lads who have been called in this season.

They fared well in the McKenna Cup, but league football is a different kettle of fish. Rory will see who’s ready, and who’s not, and who he can trust in the championship arena.

It’s hard to know what Down will bring on Saturday night. We beat them comfortably in the league, and they don’t have any marquee names that you would fear.

It’s Eamonn Burns’ first game in charge and he will be looking for his side to lay down a marker.

Newry was always a hard place to go, right back to my own time as a player, and you always knew that you weren’t going to get anything easy down there.

There’s always a decent atmosphere at Pairc Esler, and make no mistake about it, this is a tough game.

However, the reality is that Down are not in the top eight teams in the country. There are six Ulster counties in Division 2, and to be honest, you would probably rather face Down than any of those sides at the moment.

Division 1 does not look as tough as last year, but there are still some tricky games, and a good start is paramount. I expect Donegal to get the result they desire on Saturday night.

Dublin face Kerry on Saturday night in Croke Park and that’s a good contest to get the pulses races again.

You won’t have a full house at Headquarters like you had when the sides met in the All-Ireland Final back in September, but you could get 30,000 and that would be a good start.

Mayo travel to Cork and both teams are under new management this year. They will both be hoping to stat the year well, and it will be interesting to see if either team goes with a new style of play.

Roscommon welcome Monaghan to Hyde Park, and the loser of this game will probably be looking over their shoulder for the rest of the league campaign, so I would expect both teams to go hammer and thongs for the win.

Tyrone are at home to Cavan in Division 2, and they picked up the McKenna Cup for the fifth time in-a-row last week against Derry.

It was a good, niggly game to watch, and Damien Barton looks like he will bring plenty of bite to the Derry set-up. They face Fermanagh this week in another intriguing Ulster contest.

My bet this week will be on Dublin, Cork, Derry, and Tyrone all to win, while if you’re feeling daring Roscommon to beat Monaghan at 11/10 could make or break an accumulator.

I was at the launch of the new Donegal jersey in the Abbey Hotel on Monday and there was a great turnout for the function.

The KN Group are the new title sponsors and they are a huge business with 1,500 people employed in Ireland, with a further 500 in the UK.

Their CEO Donagh Kelly has invested money a lot of money in Donegal football in recent years, and it is great to see that he will continue to do so.

Donall Barrett from the MCR Group was also present and it shows where the county stands when these big companies want to be associated with the Donegal brand.

Fair play to Donegal Creameries who have been great sponsors over the last few years, and hopefully they will stay involved.

The new jersey looks well and hopefully we will be seeing it in Croke Park later in the year.