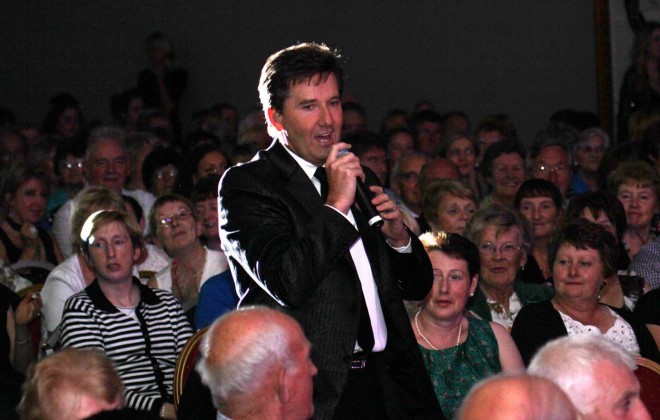 Daniel O’Donnell signs in the crowd in Dungloe at a previous concert.

DANIEL O’Donnell’s sell-out last concert of his 2016 UK tour is in doubt after it emerged the venue it is due to be held in could be closed for renovations.

According to news website, www.insidecroydon, the famous Fairfield Halls venue in the popular Irish area of Croydon, South London, is due to close in June for a £30 million refurbishment programme. However, almost 1,000 tickets have been sold for Daniel’s big show on September 23.

Tickets for the Kincasslagh crooner’s concert went on sale just before Christmas and have already sold out.

Fairfield Halls could have to refund disappointed customers around £50,000, but they might also face contract penalty clauses over any cancellation from O’Donnell’s management company. A spokesperson for the company told Inside Croydon on Friday that they received firm assurances that the venue would be available for the easy-listening star.

A Croydon Council source described Fairfield Halls management’s conduct in taking the booking and marketing the O’Donnell concert as “reckless”.

The Fairfield Halls website is still promoting the gig, even though Croydon Council, which owns the arts complex, wants to send in the bulldozers in June or July to begin refurbishing and refitting the half-century-old venue.

The Halls website says: “As seen on this year’s Strictly Come Dancing, Daniel O’Donnell returns to Fairfield on Friday 23 September to perform all his timeless hits, plus more from his latest album. Book early to avoid disappointment!”

Daniel did not do particularly well in the BBC’s celebrity dance show, despite his widespread popularity which has seen him sell more than 10 million records in a 25-year solo career.

How the Fairfield Halls is marketing the Daniel O’Donnell concert that is scheduled for more than two months after the venue is expected to close for a £30m refit.

Already a multi-millionaire, much of O’Donnell’s wealth comes from lucrative concerts, such as his 10-date UK tour in September. O’Donnell might expect to collect at least 90 per cent of the ticket proceeds for a concert at the Fairfield Halls, judging by agreements with other performers in confidential documents seen by Inside Croydon.

Croydon Council wants to close the Fairfield Halls for two years to conduct extensive building works in and around the tired and ageing venue, which has been in dire need of regeneration for more than a decade.

The Halls management, led by chief executive Simon Thomsett, has opposed the council scheme, favouring a phased redevelopment which would allow them to maintain its customer base and continue to stage some shows, such as the 2016 Panto and Daniel’s concert.
However, a phased programme of works would be at least £4.8 million more expensive.

Elements of the redevelopment are expected to be put forward to the council’s planning committee in the next couple of months. No planning permission is required for the building works planned for inside the Fairfield Halls.

But the absence yet of any planning permission was among the assurances given to Daniel O’Donnell’s management by the Fairfield Halls that his planned concert would definitely go ahead.

A spokeswoman for Daniel’s Dublin-based management company told Inside Croydon, “Before we went on sale, we were assured by Fairfield Halls management that that (closure) would not be the case. They told us that the building scheme does not even have planning permission.”

The spokeswoman declined to identify who at Fairfield Halls had given them such information, and refused to say whether their contract with the venue included any penalty clauses if the concert could not be staged.

A source in the council’s offices said, “Whatever side of the debate you take over whether or not the Halls need to be closed for two years for the works to take place, it is extremely reckless of the Fairfield management to mislead leading artists, and the paying public, in this manner.
“It smacks of petulance. I hope they don’t think the council will be bailing them out for the refunds for this.”