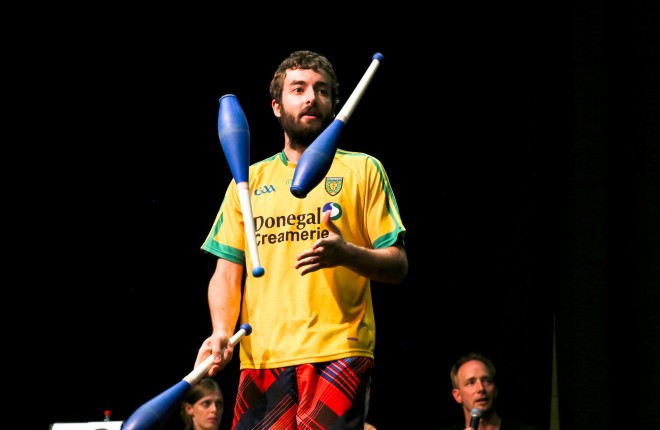 A RAPHOE man with a passion for juggling is making a name for himself having scooped two major titles this year.
Last Saturday Eoin Allan won the European Masters in Berlin and secured the top spot at the European Juggling convention in August.
Currently based in Berlin, Eoin spoke to the Donegal News this week about how a pastime at college now sees him ranked number two in Europe out of 358 competitors.
“When I was at college in Galway six years ago I joined the juggling society. I just did it for a laugh really, but since then I have become totally obsessed with it.”
They tournaments in which Eoin has competed recently are known as ‘combat juggling’. At the EU Masters in Berlin last weekend he explained what form the competition took.
“This was an invite only tournament with all of the top jugglers. Five of us live in Berlin while there were two others from Germany and three from England. In combat juggling you have three clubs and you have to juggle against an opponent, all the time trying to knock the clubs out of their hands.
“It takes a lot of practice but that’s what I’m doing pretty much any time I have a chance.”
Eoin explained that his family back in Raphoe were able to see the tournament thanks to a live Internet stream from Berlin.
When asked where he hopes to progress to next, Eoin explained: “Well, the European Masters and the EJC are the top competitions worldwide and I have won both of those. The aim now is to hold on to the titles that I have and defend them again next year.”
Eoin has also competed in the Netherlands, Ireland, Italy and in Germany and concluded that when he’s not working full time he’s busy travelling to tournaments.