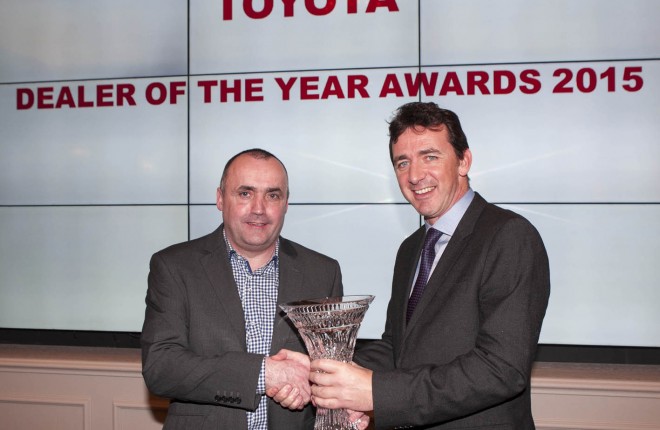 KELLY’S Sales & Service in Letterkenny has won the Overall Dealer of the Year and Best Overall Aftersales Performer for 2015 at the annual Toyota awards.

Toyota dealers from across Ireland gathered in Dublin last Thursday night for the glitzy ceremony.

A total of eight awards were presented on the night to dealers for their achievements in sales and aftersales across several categories.

The dealer of the year is presented to the garage which achieves the best overall performance across a wide range of areas in both sales and after sales. In addition, Kelly’s Sales & Service received a cheque for €5,000 to be used to reward and acknowledge the contribution of the dealership’s staff.

Meanwhile, Kelly’s Sales & Service in Mountcharles was also presented with the Accessories Dealer of the year award.

Mr Brendan Kelly noted they were delighted to be the recipient of the awards and offered a special word of thanks to his dedicated staff and to the many customers of Kelly’s Toyota.

“The annual Toyota dealership awards recognise excellence in sales and aftersales and after encouraging performances by our dealerships in 2015, we’re looking forward to 2016,” he said.