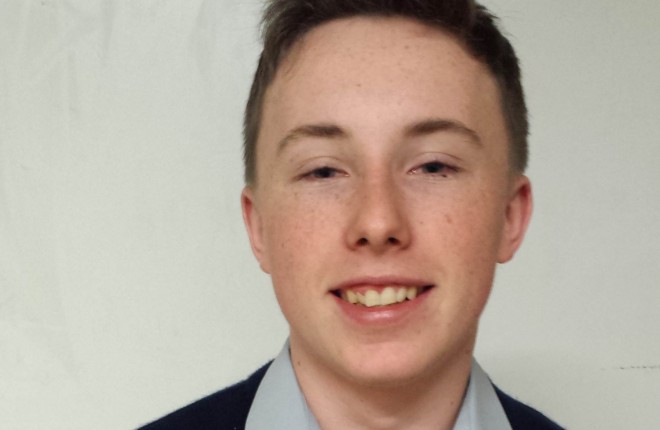 WHILE the staff and students of Deele College are looking forward to the Christmas holidays, one student in particular has good reason to look forward to the holiday season. Fifth year student, Jordan Boyce is gearing up for the world final of the BDO Youth Dart’s competition in the fabled Lakeside Arena in Surrey.
Jordan, who is sixteen years old has been preparing for the big event for the past number of months, following a magnificent showing at the qualifying event, where he booked his place in the final.
He will take on England’s Joshua Richardson, who he has watched on several occasions and though he admits that his opponent is a good player, he is confident that he has enough in his locker to bring the title home.
“I’ve been practising hard for the past number of months and on Saturday I won the Donegal Open in Quigley’s Point, so I’m very confident going into the final.”
The final will be televised live on BBC2 at 1.00 p.m. on Thursday, January 7, and while Jordan’s classmates will be back at school, he will be getting ready to take centre stage at an arena he grew up dreaming about.
The flights to London are all arranged and he will travel over with his dad, Paddy, his mum, Caroline and a team of supporters, who have followed him during his short but successful career. He will have the opportunity to practise at the arena on the day before the final and he will be given fifteen minutes on centre stage, which will give him the opportunity to take in the surroundings.
Guaranteed two thousand pounds for losing and with the possibility of five thousand for winning, many young men would become cocky, but the modesty of the young man from Newtowncunningham shines through. Asked what his plans for the winnings would be, he just shrugs and says he’ll keep it for a rainy day or to help with his dream of becoming a professional dart player.
“I want to keep my head down hope that I can break into the men’s professional scene when I turn eighteen. To do that, I need a tour card, which means that in have to win a qualifying tournament and that would allow me to compete against the best.”
Principal of Deele College, Joe Boyle says that he has been bowled over by Jordan’s success this year and that to compete in the world final in any discipline is an absolutely magnificent achievement.
“To compete in the world final of any sport is a wonderful achievement and shows a great deal of dedication and commitment. Jordan is such a quiet and unassuming young man and he will have the support of the entire school community when he takes the stage on January 7th.
“I’d like to wish him and his entire family all the best and he will return to a hero’s welcome, regardless of the result.”
BDO World Youth Final will take place at 1.00 p.m. on Thursday the 7th of January and will be aired live on BBC 2.