Advertisement
HomeSportSoccerHorgan will have Finn Harps primed for challenges ahead
Advertisement 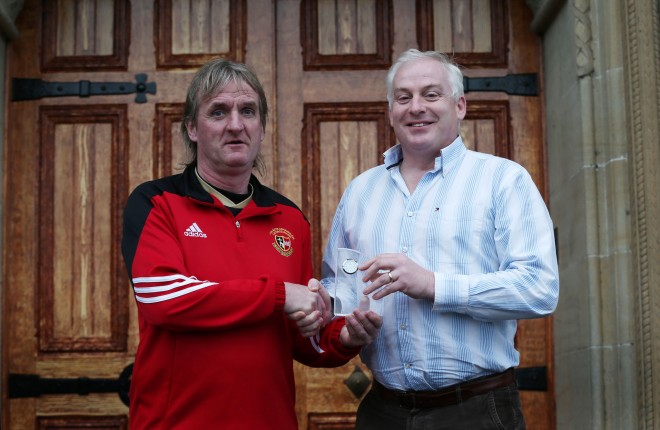 BY HARRY WALSH
THERE’S not a hint of a Donegal accent off Ollie Horgan despite the fact that he’s spent almost thirty years living in Letterkenny.
A proud Galwegian, Horgan was handed the freedom of Donegal (albeit unofficially) in November when he steered Finn Harps to the promised land that is top flight football.
Harps earned promotion to the SSE Airtricity League Premier Division after they defeated Limerick FC 2-0 in front of a packed house at Finn Park.
It was the culmination of two years plotting and planning by Horgan and his backroom team coupled with hard work, effort and no little skill from his players.
Fast forward six weeks and Horgan is now planning for life alongside such luminaries as Dundalk, Shamrock Rovers and Cork City as well as local rivals Derry City and Sligo Rovers.
Twelve players have penned deals with the club since the end of the season but he’s looking to sign as many more in the coming weeks as he looks to mould a competitive Harps team.
“Whatever happens next year it’s important to note that we finished well behind Wexford Youths (First Division champions) last season and we have to bridge that gap first before we look about taking on the more established top tier teams,” he said.
This reporter is more than familiar with such cautious, almost negative, responses from the Harps boss.
“I’m just being realistic. We’re a part-time team with a small budget who will be playing against semi-pro outfits who have multiples of our budget,” he argued.
Indeed, Harps’ budget was small by First Division standards last season and yet they still managed to finish ahead of the likes of Shelbourne and Athlone Town.
“We won’t wave the white flag just yet but, that said, I’m just trying to be honest,” he explained.
Whatever happens in 2016, Horgan will always be remembered for being the man who led Finn Harps to promotion.
“Our form improved over the last third of the season. We got stronger as the season progressed and come the play-offs I felt we were as good as we were all year. Credit there has to go to fitness coach Michael Black who had the lads in great shape and the likes of James Gallagher on the training pitch,” he said.
Unfortunately, Gallagher has since severed his links with the club. A former goalkeeper and manager at Finn Park, Horgan said his presence will be badly missed.
“He’s a brilliant man and will be a massive loss. I’ve tried to get him to change his mind but.. It’s like losing your best player,” Horgan said.
The Harps boss often talks about fine margins and he feels that things could easily have worked out differently last season.
“The players deserve every credit. They gave it their all and it worked out well in the end but we enjoyed a little luck along the way. Last year was brilliant for players, management and supporters alike. We had fantastic support since the first game away in Tolka Park but we’ll need the supporters to be patient with us next season.
“We had a difficult spell in the middle of the season when our form dropped a bit and others like UCD and Shels lifted their game. We had to improve and we did and I don’t think we lost a game in the last quarter of the season, apart from a 1-0 loss away in Limerick which was like a win if you know what I mean,” he mused.
“Listen, they were good times. Good times for the supporters, players, management and the lads behind the scenes in the boardroom who keep this club going on a weekly basis. We’ll come together and start it all again in the coming weeks and we’ll see where that takes us next season,” he said.
Indeed, Michael Black met those players already signed on Wednesday evening to sort out strength and conditioning programmes ahead of the new season.
“We’ll take a few beatings on the road, maybe heavy ones at that, next year and we need our supporters to be patient. We don’t have the resources of some of these other clubs. We’re only part-time and we need the supporters to get behind us once more,” he said.
A former Salthill Devon and UCG player, Horgan first came to Donegal in 1989 when he took up a post in St Eunan’s College. A no nonsense defender, Horgan was a member of the Fanad United squad who won the FAI Intermediate squad. He went on to manage at Tri-a-Lough for ten years before taking up the mantle at Finn Park two years ago.
Meticulous in his preparation, Horgan will have Harps primed for the challenges which lie ahead. With a little luck they might just surprise one or two of the big guns. Here’s hoping.