Advertisement
HomeHeadlinesChristmas parcels up by 25 per cent in Letterkenny
Advertisement 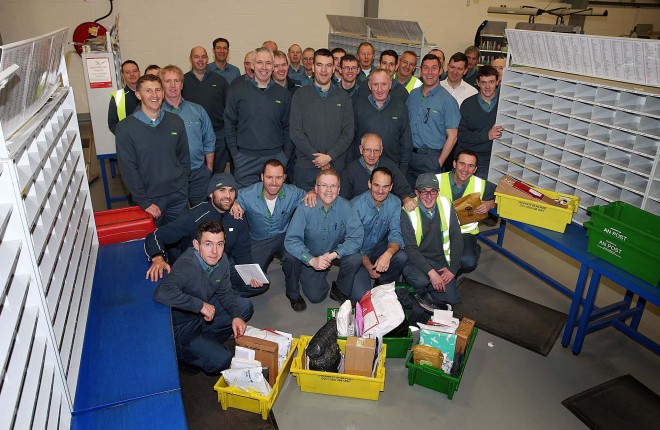 Letterkenny An Post staff who are working when most of us are sleeping.

GIVING presents and exchanging Christmas cards is all part of the celebrations that bond together family and friends the world over at this time of year.
Names of long lost friends and acquaintances are often retrieved from an old address book some time in early December as Christmas cards are written with the promise of a letter to follow in the New Year while loved ones who have emigrated are also fondly remembered through a card and/or parcel from home.
Early December also signals the start of a hectic Christmas season for the thousands of An Post workers throughout the country. Traditionally their busiest month of the year, their job it is to ensure that each and every item posted reaches its intended destination before Santa arrives on Christmas Eve night.
An Post has three Head Offices servicing County Donegal – at Lifford, Donegal Town and Letterkenny – with scores of sub offices spread right across the county.
Donegal’s largest and busiest is on Business Park Road, Ballyraine, Letterkenny.
Local man, Paul Herrity is the Delivery Services Manager and aided by his trusty band of lieutenants in a staff of forty eight, he has to co-ordinate a service which is stretched to the limit at this time of the year.
Come the end of this week, over a million items of mail will have passed through the sorting office in Letterkenny during December – a thirty per cent increase on other months.
Normally, it takes a postman less than an hour to sort out his mail in the morning before starting deliveries. The same process takes up to three hours at the moment with postmen clocking in at 4.30am.
The first mail, on its way to Letterkenny for following day delivery, arrives in the town shortly after midnight from Athlone followed by three further lorries at 3am, 5.30am and 7am with one lorry going in the other direction at 6pm each evening.
All that mail has then to be dispatched to the sub-offices which requires a massive, concentrated and collective effort by all members of staff.
“It’s a great team effort by all involved,” Mr Herrity said.
When the Donegal News called into An Post’s new facility at Business Park Road on Monday morning it was very much a case of all hands on deck.
Alanna McBride, daughter of former Post Office clerk Stephen McClafferty, is the only female member of staff while long-time postman Denis McElhill is working his last Christmas.
Denis, who delivers mail between the High Road and Kilmacrennan, has been a postman since 1971.
“He told me that this is his last Christmas. He says it’s time for him to start enjoying his life and fair play to him,” Mr Herrity said.
Although Christmas remains the busiest time of year, the Delivery Services Manager said that there has been a noticeable drop in the number of Christmas cards this year although that has been more than compensated by the huge increase in parcels and packages.
“We’ve noticed an awful lot of packages coming from China, via Allie Express, this year. I’m told that the Chinese government gives free postage for up to five years for any new start-up companies,” Mr Herrity said.
“The volume of parcels is up by twenty to twenty five per cent this year with similar increases last year. Postmen are now being asked to deliver an awful lot more packages that they used to but a lot of them are very small,” he said.
“At this time I would like to take the opportunity to thank all members of staff for their help and co-operation throughout the year. It really is an all-round team effort,” Mr Herrity said.
Some semblance of normality should be restored to Post Office life in the New Year in the build up to the next big day on the Postman’s calendar, St. Valentine’s Day, unless a General Election is called between now and then!