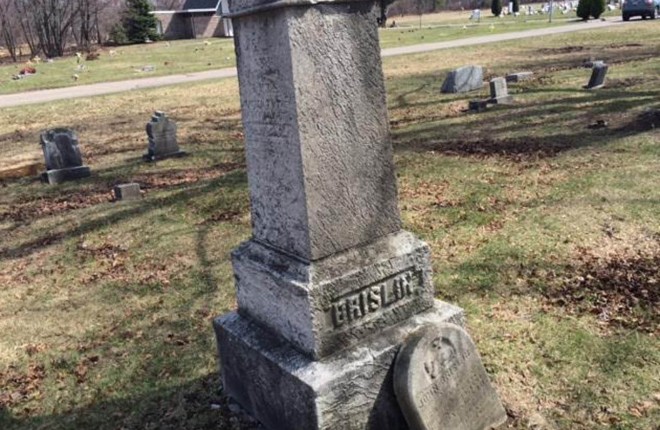 The gravestone of Condy Breslin.

A FUND-RAISING campaign has been launched to restore the grave of a Donegal miner buried in the town of Hazleton, Pennsylvania.

For more than 100 years, the region in Northeast America drew the “poorest of the Irish poor” from the early 1800s until the start of the 1900s.

They were attracted by the endless supply of work on offer in an area which was home to some of the richest veins of anthracite coal and also the world’s largest silk mill.

One of the earliest miners to arrive was a man named Condy Brislin (Breslin) from Loughros Point outside Ardara. He spent more than 40 years working in the mines before succumbing to Miner’s Asthma on June 19, 1880. He is buried in St Gabriel’s Cemetery, Hazleton.

His grave was recently rediscovered by a local man, Brian Dunnigan, after he was appointed president of the Ancient Order of Hibernians in Hazleton.

Mr Dunnigan enlisted the help of Charles McElwee, a young man with family roots in Donegal and a strong passion for Irish history of the region, and together they hatched the idea to restore the resting place of Condy Breslin.

Speaking to the Donegal News this week, Mr McElwee, of the Hazleton Historical Society explained how they also have strong hopes of raising awareness of the strong connection with Donegal.

“In particular, it attracted emigrants from Donegal, and more specifically East Donegal and Glenfin,” he said.

“We hope that our work in restoring the grave of Condy Breslin will lead to a renewed focus on the area and encourage more people in Donegal to explore links they may have with the region.”

A lobbyist in the government affairs sector, Mr McElwee has a passion for history, in particular that of the many Donegal emigrants who worked in the Pennsylvania mines.

He explained that the final resting place of Mr Breslin serves as a memorial to all those who lost their lives in the Pennsylvania mines and also reveals an insight into a tumultuous period of American history.

“We know that Condy Breslin was about 65 when he died. Carved in the marble gravestone that his twin sons, Neil and Charles, erected in St Gabriel’s Cemetery are the symbols of his trade – a crowbar, a shovel, a pick and a fishtail drill. Charles, himself a miner on Colorado, came east for the funeral and he ‘pondered long over an epitaph such as his father might have chosen’.”

He came up with the following lines which are carved into the gravestone:
‘Forty years I worked with pick and drill,
Down in the mines against my will,
The Coal King’s slave but now it’s passed.
Thanks be to God, I am free at last.’

Mr McElwee continued: “Over the years the grave has fallen into disrepair, not through neglect but simply weathered by age. Hazleton is an isolated pocket of Pennsylvania, 2,000 feet above sea level which experiences terrible weather. It’s fair to say that the miners who arrived here from Donegal came from similar conditions.

He added: “These miners worked in oppressive conditions and their survival was not guaranteed. It was the unrest of workers in Hazleton at conditions they were forced to work in which led to the growth of the labour movement in the United States.

“Unionisation addressed the need for fairer and better working conditions. The charge was led by the Molly Maguires and they have been extensively studied, but the general emigrant population here, less so.”

Mr McElwee said he feels very strongly that these Donegal emigrants who made their life in Pennsylvania do not receive as much recognition as they should.
“We hear a lot about other emigrants from the county who went on to do great things, but there is really a very rich history here in Hazleton and surrounding areas which deserves further attention.

“Nearly all the Irish who are buried in St Gabriel’s cemetery can trace their roots to Donegal, and especially the area of the Finn Valley.
He concluded: “My own roots are in Ballybofey. My mother’s family were from Mayo and Cork but my father’s were from Donegal. I was raised to embrace my heritage and my family’s story. I have never been to Donegal but I plan to visit in the near future.”

Last year he received an award from the Irish Echo newspaper for his study of Irish history in the Pennsylvania region.

Anyone who is interested to learn more about Hazleton’s Donegal connection or the grave restoration project can contact Mr McElwee at cfmcelwee@gmail.com

The full article appeared in Friday’s edition of the Donegal News.