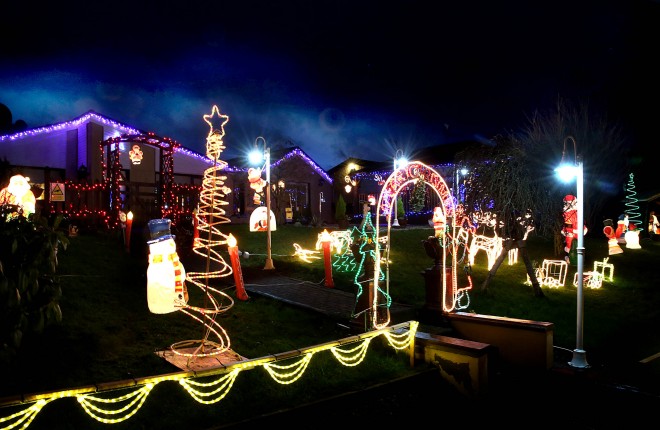 The display of Christmas illuminations at Joe and Angela O’Donnell’s house at Leck, Letterkenny which has drivers stopping on the side of the road.

THIS time of the year brings out the creative side of one Letterkenny family when it comes to Christmas decorations, and their 2015 display has drivers stopping on the side of the road.
It is the 27th year that Joe O’Donnell, his wife Angela and family have put on a Christmas lights extravaganza at their Leck home.
O’Donnell’s display, sprawling all over his house, the trees above, and lawn – front and back – has seen motorists tapping their brakes in surprise and awe since they were put in place on Sunday last.
The display includes as many as 100,000 lights and can be seen from the Mountain Top – more than three mile away.
It powers up after four each evening and this year’s arctic theme comes complete with penguins and polar bears while there’s a new feature – laser lights – at the back of the house.
“We brought the laser lights from the States earlier this month. The theme on the deck this year is an arctic one with penguins and polar bears,” Joe O’Donnell said.
It all started twenty-seven years ago following another trip to America.
“We only used to put up a string of lights until we went to America where Angela’s sister had some more lights ready for us and it’s taken of from them, although it can be a little awkward as they (US) use 110 volts and we used 220,” he explained.
“The lights are all fed through a series of extension leads in seven or eight little circuits,” he added.
The Penguins and Polar bears, purchased for €60 to €70 each in Lighting Concepts earlier this year, are the most expensive items on display but Joe is still on the look-out for a six-foot Santa, stolen from the garden a number of years ago.
“The lights were on too when Santa was stolen as you could see where the wire was snipped and I never could replace him. He was six-foot tall and the only one of its kind that I have ever seen. Thankfully though it was the only thing that has even been stolen from the garden,” he said.
What is the cost of putting on such a magnificent display each year?
“It’s not too bad. There’s all low wattage items and it wouldn’t be much more than €70 extra on the bill for the period,” he said.
The lights went up that little bit later this year because Joe and Angela had been on holiday in America.
“I spent ten days or so putting them up with help from my sons Philip and Paddy although I prefer to take them down myself as I take them down right which makes it that bit easier putting them up again the following year,” he said.
The house is on Leck Road over the Oldtown bridge and has signs in the garden to get you started and into the holiday spirit. 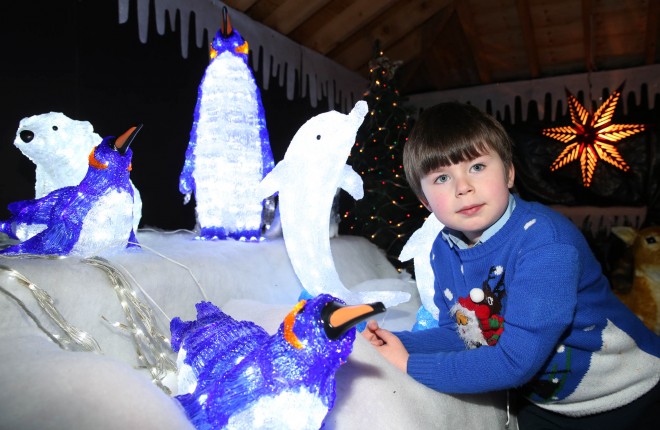