You might remember I put myself through a difficult challenge during the summer where I attempted to sculpt a dazzling six pack out of the spare tyre I was carrying around with me.

Well, okay I didn’t have a spare tyre but I have always had a little area on my lower stomach that I could not tone up regardless of the exercise I chose to do.

Everyone will be able to relate to that as we all have our problem areas. I decided I would try to tackle mine to test my discipline.

I spoke with a personal trainer based in Northern Ireland who talked me through the plan of action. I was to follow a strict eating regime  and consume absolutely NO alcohol for twelve weeks.

I was also given specific exercises which I was instructed to do along with my regular training. I chose a particularly difficult time of year to undergo this ‘transformation’ as summer is a time where we enjoy our food and drink. I remember pondering this very point quite bitterly as I sat on the periphery of my friends eating a carrot like some demented rabbit.

My aims with this challenge were as follows;
• To test my discipline.
• To monitor my moods and see if the strict lifestyle would have an adverse effect.
• To tone and strengthen my core.

You will notice I listed my cosmetic aspiration last. The physical results of this challenge didn’t interest my as much as the physiological results. I was keen to see if my moods would be effected by restricting nice food. 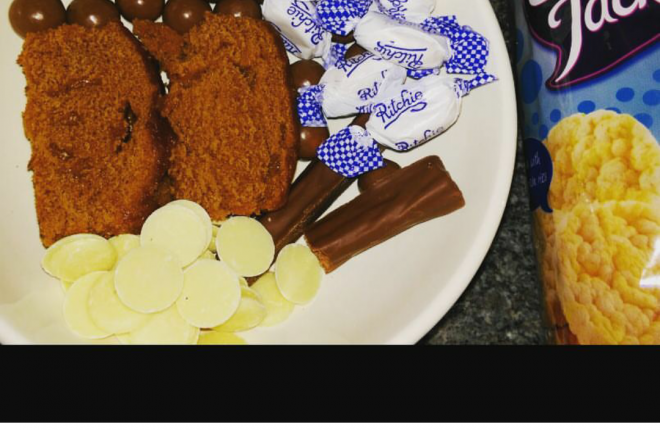 Week One
I was motivated and ready to take this challenge by the horns. I spent a small fortune in week one as my food plan required the use of protein powder which set me back €60. My food shop that week was also quite high. Who knew a tiny bag of quinoa was so expensive. I learned a lot in my first week. Mainly that cravings are the devil!

I found myself thinking about food ALL. DAY. LONG. Usually food isn’t something that I think about that often but once it is taken away I began obsessing about it.
Strange new love of the week: Chocolate.
During week one I developed a deep love for chocolate and craved it more than any other food. Prior to the #SixPackChallenge I was more of a crisp person however chocolate is now my best friend for life. Yes that is correct, the craving for chocolate did not go away once the challenge ended.

Week Two
I settled into my food regime which involved starting each day with a tiny bowl of gluten free porridge. I broke away from certain foods in the diet quite quickly as they were too full on.. For example, I could not and would not eat one whole egg and FIVE egg whites each morning. I tried it once and felt nauseous afterwards so that was knocked on the head immediately!

Week Three/Four/Five
By this point my cravings were at an all time high but I was very proud to have made it to week four before I had my first big blow out. I remember going to the shop and not knowing where to start. I had decided to have a cheat night which meant I could eat whatever I wanted but I think the excitement prevented me from making good choices and I ended up with the most random junk food. (See pic) Snack’a’Jacks and Ginger Bread. It was so dry and disappointing. FAIL! The salt from the rice cakes was nice though.

Week Five-Twelve
I began feeling tired and a little agitated at the half way mark. It was cause by a combination of things. I began to feel that I was isolating myself from my friends as I had been avoiding pubs and restaurants to help reduce temptation. In doing so I was missing out on the fun activities associated with summer.

Going for meals was boring. There was no excitement as I knew what I would be having for dinner. Salmon. With no side order or dressing. Oh and a glass of water (With a slice of lemon as I was spoiling myself) My dinner buddies would order wine or cold delicious beers and I would sit there wondering what I was putting myself through it all for.

Out of the blue, literally one day as I did up my jeans I caught my reflection in the mirror and I noticed a dark smudge on my stomach. I stepped closer to the mirror to further examine the smudge. I initially thought it was fake tan but I realised with over the top glee that it was in fact my very first little ab nestled perfectly on my stomach. I spent the following forty minutes flexing my muscles and generally thinking I was fabulous. It was a nice little moment as I began to see my hard work pay off.

As I went through this twelve week experience I had some highs and lows and at the end I walked away with a greater respect for athletes who have to restrict themselves on a regular basis.

I can tell you it is not something I would want to do long term. It is isolating, boring, difficult, hunger inducing and agitating. However, it is also extremely rewarding, fulfilling, discipline strengthening and it has the ability to change your mind set which it did for me.

I drink very little alcohol now with maybe one glass of wine passing my lips every two/three weeks. I am more aware of what goes into my body and I am much more determined to keep up with my training. I also had the added bonus of developing muscle all over my body while participating in the #SixPackChallenge, something I didn’t think about in the beginning. My arms and back became especially toned which you can see in the photo.
In Conclusion

Would I recommend this? No. Not for someone who isn’t already serious about training. I would not recommend you start your healthy eating/training experience with a six pack challenge as it will put you off for life! I think there is no harm in adopting specific elements of the challenge such as the discipline side of things as you might surprise yourself.

I wanted to push myself to see if I would crack under pressure and although I didn’t manage to produce a six pack I am more toned now than I have ever been before and I plan to continue with a less extreme food plan. One that allows chocolate would suit me!

So was the Six Pack Challenge a success? Over all I would say YES!