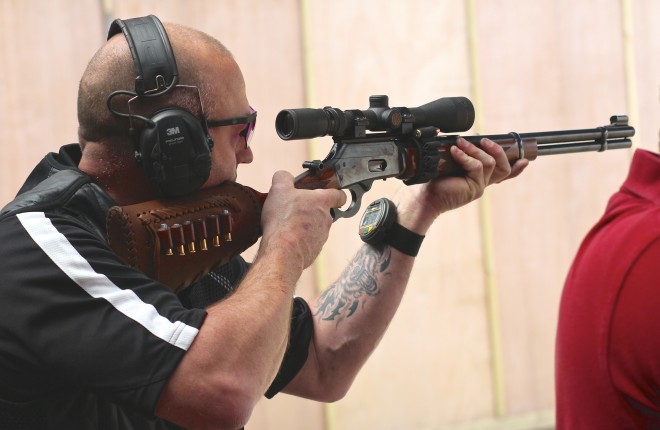 Raphoe man Mike Kelly says he only ever took up shooting to fill the void left when he had stopped playing football. Now he’s part of a five-strong Irish team who heads to Germany this weekend to take part in the World Championships in Leitmar in Germany.

“I never had any mad interest in shooting or anything, I was just looking for something to fill the void after I stopped playing football. I knew a few people who were doing this, I went along and enjoyed it and it has all gone from there.”

A member of three local clubs – Bracken in Strabane, the Donegal Target Club of which he is a founder member and Lifford – Mike has been shooting for a few years now and says it wasn’t long before he realised he could compete at a high level.

“At the start I was competing in club events but soon that wasn’t enough and I started travelling around the country to more and more competitions. I started off in the B class which everyone does, but it wasn’t too long before I was moved up to X class, the highest class and I have been competiting there since.”

He’ll head to Leitmar this weekend to compete in the Galley Rifle 1500 class and explains that selection for the Irish team came about through sheer hard work and determination.

“To be honest I set myself that target at the start of the year, but I knew that the only way you would ever be selected for the Irish team was to shoot consistently well in competitions. You don’t just get selected, you have to qualify and my best three scores of the year were enough to earn me a place on the team, I actually took the place of the team captain.”

The ruling body for the Irish team that heads to Leitmar this weekend is the National Association of Sporting Rifle and Pistol Clubs and while Mike says it’s still very much a minority sport, there is big interest all over Ireland.

“What we do is target shooting, and to the lay man it is not totally dissimilar to what they might see in the Olympics although it is not exactly the same.”

Mike’s expertise has been built up through sheer determination and dedication and he has travelled across Ireland and to the Isle of Man (where, for instance he took three first place prizes) and England over the past few years as he honed his skills.

The Irish champion at the B class a few years ago, his steady progress meant Mike put more than the targets he was shooting at in front of him, because once this year started, he had a place on the Irish team and the World Championships in his sights.

“Not everyone wants to compete at that level so first of all you have to declare an interest in being selected for the international team. Like in any sport after that you have to show that you are good enough to be selected.

At the start of this year, that’s the goal I had in mind but I knew that I would need to shoot consistently well over the year to earn my place.”

Unsurprisingly he says he is honoured and humbled to have made the Irish team, but his goal wasn’t just set for personal gain.

“It is a huge honour to be able to say you have represented your country and I am very proud to have qualified, but when I set out to do this I was also hoping that if I could make the team it would help raise the profile of the sport here in Donegal.”

And the Raphoe man who is still hugely involved in Raphoe Town Football Club as Chairman and as a coach, says this type of shooting is one that he believes would have huge appeal for many.

“It is a mixed sport (men and women compete) and like any good sport there is a social aspect to it, but it is also not something that is set aside for the elite. Every competition is an open compeition with classes set aside so you only compete against people of a similar standard. We have great local clubs here and it’s always great to see new people take up the sport.

At the minute Bracken Club has 55 members and the Donegal club has 30 members and we have a league ongoing right now. I really think that it’s something that lots of people would like to try and I’d certainly recommend it to anyone.”

The GR1500 class in which he will compete for Ireland this weekend is described as a competition that combines all the elements of accuracy, speed, distance and position in a single event.

“It is a test of all those things and of mental strength and concentration as well, you have to shoot 150 rounds and the match will take over 90 minutes to shoot.”

The match involves shooting at a target from a range of various distances from 10 metres to 50 metres, from various positions – standing, kneeling, sitting, right and left shoulder and all within a certain time.

“It takes a lot of practice for instance to be able to shoot from both shoulders, never mind do that from all of those positions. To add to that you have a small time frame so, for example at 10m and 15m you have 30 seconds to get 12 rounds shot – but the gun only holds 6 so you have to be quick and accurate and you have to reload as well.”

Making sure you get all that done quickly is one thing, but each match is governed by Range Officers who act as monitors or referees and there are a whole host of offences that can lose a shooter some points.

The Irish team though are well up there with their international counterparts and in a recent international match held in Ireland where England and Germany were visitors, the Irish came out on top.

For Mike, the World Championships represents an opportunity for him now to test his skills at the very highest levels and he is looking forward to the challenge.

“I had to really put the work in to earn my place, I had to get the practice in and had to make sure I kept my skills level up to the highest possible so I’m really looking forward to the competition now.”