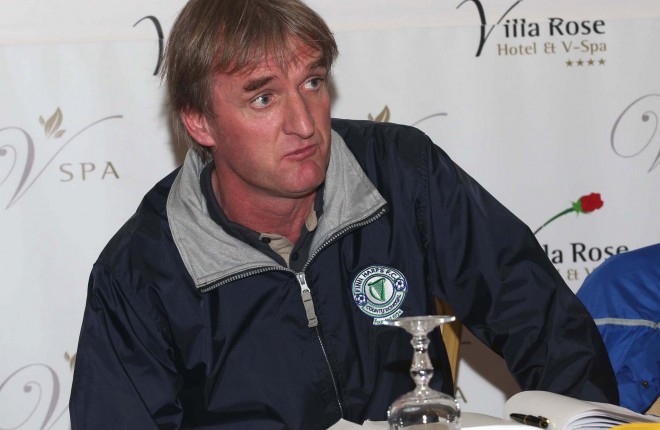 FINN Harps manager Ollie Horgan will ask his charges to ‘go to the well’ for one last time this season when they face Limerick FC in the Play-off Final second leg on Friday night.

It has been a long campaign for Harps, with 34 competitive games already completed.

There is just one fixture left, and while the Ballybofey club trail the Shannonsiders 1-0 from the first leg, their promotion hopes are still very much alive.

However, they face a tough test against a Limerick team that dominated the first encounter.

Martin Russell’s side are full-time professionals, which is in stark contrast to Harps’ situation.

Tony McNamee will work three long shifts in Michael Murphy Sports & Leisure his week, while Keith Cowan teaches in Colaiste Ailigh, and Matthew Crossan will be running his takeaway businesses.

The Harps players will tend to their daily duties before turning their attention to the second leg, but when Friday evening arrives, they will be ready for business.

“It is all still to play for which is mighty,” said Horgan after Monday night’s match at the Markets Field.

“Look, don’t be under any illusions. We’re playing a full-time side in Limerick.

“Each and every one of them will be in tomorrow morning for a recovery session, and they have no work to go to.

“We know what we’re up against – they are a better side than we are.

“We accept that, and we have no problem in arguing that we don’t have Shane Duggans, or the likes of the Dean Clarke boy. They are highly-paid professionals – that’s what they are.

“But by God, we had spirit out there, we had determination and we had lads that put their bodies on the line out there.

“They have done it all year, but we’re looking for them to go to the well one more time on Friday basically.”