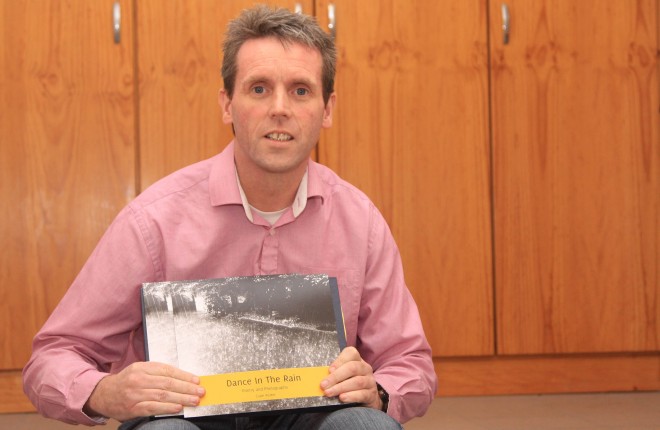 Liam Porter with his book of Poetry, Dance in the Rain.

THE launch of a book of poetry and images by well-known Raphoe man Liam Porter in An Grianan Theatre later this month, is the depiction of one man’s voyage through life’s stormier seas.
‘Dancing in the Rain’ has a very unique origin. Its content emerged from Liam’s personal commitment to write one poem a day for a year – a pledge to himself to be there  for another day.
Speaking to the Donegal News, Liam acknowledged he was in a very dark place back in 2012 as a result of having lost his job a number of years previously, with little income, a family to support and no one hiring journalists during the recession.
He began an enterprise course which began to rebuild his self confidence through meeting  other people and by 2013 he started to write his poems as a way of expressing how he felt.
“It was as if once I had written down what I was feeling it had less power over me – it was out. I put the poems on a blog and vowed to write one every day thinking who would read them  anyway.
“I soon realised that people were reading them as they messaged me and when I missed a day’s posting I got a call to say I had not put a poem up that day. That made me all the more determined not to fail,” Liam explained.
It wasn’t until he put his forthcoming book of poetry in context in his blog last week that people began to realise what it was all about.
“It was part of a very difficult journey for me. No matter how many jobs I applied for there are only so many rejections you can take. Fortunately my wife Lorraine was working but I had begun to think that maybe my family would be better off without me – I thought they would be no worse off – then I knew I needed to do something.”

Brave V Lucky
Liam explained that people say he is very brave for putting his thoughts and feelings out there in his poems but he believes he has been very lucky – by putting his poems out there he realised he was not alone and hopefully helped others to do the same. He described himself as an absolute wreck as the process began but through the enterprise group positivity he began to believe he had something to offer once again.
“Some people did not even known they were helping me. There were so many people there with similar types of stories to me – all on their own journey, but very positive.
“I wrote 366 poems to fulfil that promise to myself and 97 of them are published in the book, most with accompanying photographs, taken afterwards by me or other people who read the poem in question. When I looked at some of the poems I am surprised I wrote them – others seem like rubbish – but its where I was at mentally at the time.
“It was Sabrina Barnett who was my partner in a Strictly Come Dancing who suggested the title for the book saying – “life is not about waiting for the storms to pass but about dancing in the rain”.”

Stepping out
It was not just taking part in the Strictly that saw Liam move out of his comfort zone and embrace new experiences. He got back into fitness training, coached junior Gaelic teams for the first time, climbed Errigal and ran a 5k for the first time in 20 years despite trouble with his knees.
“Every wee thing I get involved in now I get more back than I give – really positive,” he  said.
Jason Black will launch ‘Dancing in the Rain’ on November 26. Jason’s talk Liam attended on everyone having their own Everest to climb greatly impressed him.
Liam wanted to encourage anyone who was felt they are in a dark place to look for help.
“You never know what anyone else is going through. Thanks to good family and friends I came out the other end. The book is a big part of that journey. The daily poem was a target that had to be fulfilled so I had to be there the next day – It worked.
‘Dancing in the Rain’ has its dark poems but it does end on a very positive note,” he added. Liam and Lorraine’s daughters Niamh and Katey also helped with the book. The book is printed by Browne Printers and will go on sale at €20. The launch is at 8 pm and everyone is welcome.