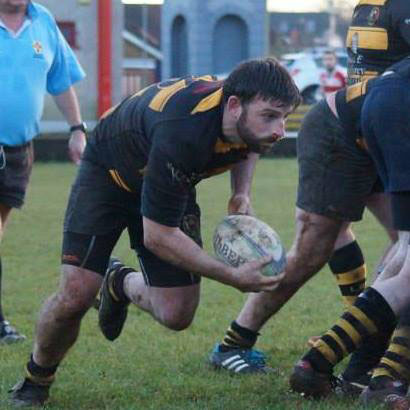 If you were throwing a party and you could invite anyone in the world, dead or alive, who would you ask around?
Both my grandfathers.

Where do you like to go out to celebrate after a big victory?
The usual routine would be our club room, then we would hit the Downtown Bar and maybe Vintage.

What’s the worst pitch you’ve ever played on?
Donegal Town’s pitch, it’s like a muddy beach.

Which character in any film are you most like?
I’d say Al Pacino.

Any odd items in your kit bag?
A bag of studs that’s about it and painkiller cream.

What’s your preferred brand of gear?
The last few boots were Kooga and they lasted longer than the others. Christ I need a new pair now, if anyone wants to sponsor me!

Who’s the biggest joker in the team you play for?
Christopher Digimas (Digi) is always on point with a funny remark. He doesn’t miss a trick and a fine musician to boot.

Which team mate has the best looking other half?
Sure they are all young pups in the team – they don’t have other halves yet. But my wife is a stunner, so I’d say me.

Who is the worst trainer?
John Anthony Mc Fadden if there is any strength or conditioning he will make up an excuse to sit out. He always leaves early on a Tuesday for the half-price cinema tickets.

Who’s the best/worst person to sit beside on the team bus?
The worst would be Gary Canning, with the size of his arm there wouldn’t be much room for sitting beside him.
The best would be Eoghan O Riain our scrum half. There is loads of room beside him, but you better get into the ruck he is telling you to get into or else you’re in trouble.

Toughest opponent you have faced?
Enniskillen No 8, I tackled him and winded myself, but still stopped him!

Best or worst quote you’ve heard, either from a manager, player, opponent?
“If one lad gets into trouble (a fight), everyone get stuck in” – from Collie Farrell, who is our new coach. Gotta love it.

Best manager you’ve ever played under?
Has to be the one an only Boyd Robinson (a leader of men) – Joe Schmidt has nothing on him.

Best ever performance?
Managed to score 3 tries against Strabane which was nice, but we still lost which was a pain.

One to forget?
When we got relegated by the P.S.N.I two seasons ago.

Sporting ambition?
To keep playing rugby as long as my body lets me, and encourage more people to try rugby and give it a go.

When you were playing in the back garden, who did you pretend to be?
Probably Dennis Bergkamp, as I hadn’t a clue of rugby when I was that age.
I was a big Arsenal fan, but find it hard to watch soccer now with all the play acting.

If you were in charge of transfers, who’d be in and who’d be out of the team?
We have a young energetic team with a lot of heart and to be honest I wouldn’t change a thing.