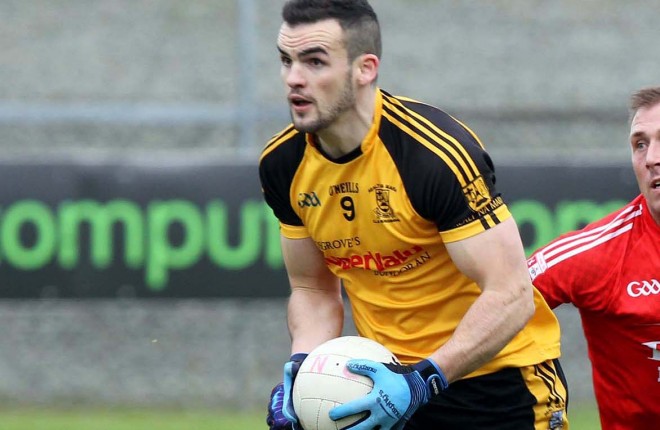 Bundroan’s Peter McGonigle, who will play in the Ulster Intermediate Championship final on Sunday.

It’s great to see a Donegal team in a provincial decider, and I’m sure the whole county will get behind Bundoran this Sunday when they take on Loughinisland in the Ulster Intermediate Club final.

They’re bidding to follow in the footsteps of St Michael’s in 2004 and become only the second Donegal team to win this competition.

It will be a tough ask, and the bookies have installed them as big underdogs at 11/4 to win. However, I have been speaking to a few people from Bundoran and I know they fancy their chances of collecting the silverware this week.

The continued doubts over Jamie Brennan’s fitness is a worry for them. He is a top class player and at that level, you need to have your full artillery available. The final may come a bit too early for him, but if he is fit, it will give the whole panel a big lift.

Bundoran are a physically strong side, and they are backboned by their half-back line of Paul Brennan, Shane McGowan, and Johnny Boyle. Those players will look to drive forward and link the defence with the attack.

Loughinisland are said to be very strong in the middle of the field, but with a midfield partnership of Ciaran McCaughey and Peter McGonigle, and Gary Clancy helping out, Bundoran will feel that they can get a foothold in that sector.

In their semi-final, veteran forward Christy Keaney scored 1-5 from play, while his brother James has been going well in the full-back line. They also have some exciting young players coming through and Brian Gavigan seems to have blended youth and experience together well.

Loughinisland would have played regularly in the Down SFC in recent years and they defeated a fancied Edendork team containing Darren McCurry and Niall Morgan in the quarter-final.
Down club sides are traditionally strong and feisty and they are quite content to slog it out if necessary.

Bundoran have had a good year and they could yet get back to Division 1. They will be building towards senior football and this run will help them in the Donegal SFC in 2016.

They have a couple of players that might not be far off intercounty standard, and I’m sure Rory Gallagher will be in Owenbeg to keep an eye out for anyone who impresses.

It will be a great occasion for the Bundoran club and it would be fantastic if they could come back through the Gap on Sunday evening as Ulster champions.

The senior final also takes place on the same day with Crossmaglen Rangers and Scotstown set to battle it out at the Athletic Grounds.

What can you say about Cross that hasn’t already been said? They are a machine, who just always seem to deliver on the big day.

I read this week that they have won 35 out of the last 36 County, Provincial, and All-Ireland finals they have competed in. That is an astonishing record.

Crossmaglen have a template that the big clubs in Donegal should be following. They nurture their talent properly and bring them through with the same ethos as their senior team. It is all about moving the ball quickly, using the kick pass. They are the benchmark that all other clubs should aspire to.

They overcame a determined Kilcoo side in the semi-finals which was no mean feat and they even had the luxury of bringing on Jamie Clarke for the last four minutes.

Clarke would walk onto any county team in Ireland never mind club side, but at Cross, you have to earn your spot. It will be interesting to see what kind of role he plays for them this week.

The Kernans – Aaron, Stephen, and Tony – are still to the fore for the Armagh kingpins and they will not be easily contained.

Scotstown are a highly-rated team and they have defeated Slaughtneil and Trillick on their way to the Ulster decider.

Darren Hughes has been a revelation for them at full-forward, and he has developed a real knack for getting goals. Kieran Hughes is playing in a deep-lying playmaker role, while Rory Beggan’s long-range free-taking could be crucial.

Cross start the match as clear favourites, but I don’t think it will be that straight-forward and I am expecting a close-run contest.

I stuck my neck out a couple of weeks ago, and tipped Scotstown to go all the way. I’m not going to change my mind at this stage and I think the Farney county representatives will prevail.

Killybegs man Shay Murrin goes in search of silverware in the curtain-raiser to the Crossmaglen-Scotstown game when the Faughanvale side he coaches face Rockcorry in the Junior decider.

Shay is a good friend of mine and I saw him in action when I helped him with a bit of coaching at the Comp in Glenties. He was only there one year, but still managed to take a team to an Ulster Final.

Derry football is competitive, but Faughanvale have had a great year. Shay is a good football man, who did a lot of work with the Killybegs GAA club, and hopefully he will be celebrating on Sunday night.

The International Rules took place on Saturday and it was a good night for the hybrid sport.

Australia’s second half fightback set up a tense finale, and none of the 38 odd thousand people who attended would have gone home disappointed.

I was at the match myself and although I thought the first two quarters were fairly mundane, the contest did improve as the game progressed.

One noticeable thing was the Australian’s lack of physicality compared to previous years. There were no monsters like Barry Hall, who used to bully our lads and claim mark after mark.

The nasty element of the game has gone and to be fair, I think it does lack that spark now. Yes, the Aussies had taken it too far with clothesline challenges and spear tackles, but the odd dust-up was half the appeal of the game, and there was none of that last week.

All the violence seemed to be at Fenway Park in Boston for the super 11’s where Galway took on Dublin. Almost 40 thousand spectators attended the event, and they would have all been on the edge of their seats when the fracas involving all the players ensued.

It certainly fed the stereotype of these wild hurling men with sticks, and some cynics have suggested that it was an orchestrated PR stunt. It got people talking but I wouldn’t say there is a future for the super 11’s, unlike the International Rules which now looks revived.

The players take great pride in putting on their country’s shirt and it is attracting the stars of Gaelic football.

If there was a second test this week, I think you would get a good crowd at it. There is talk that there will be a game in New York last year and I’m sure that would be an enticing development for players.

The top brass of the GAA seem happy for it to continue, but a little more devilment wouldn’t go amiss.