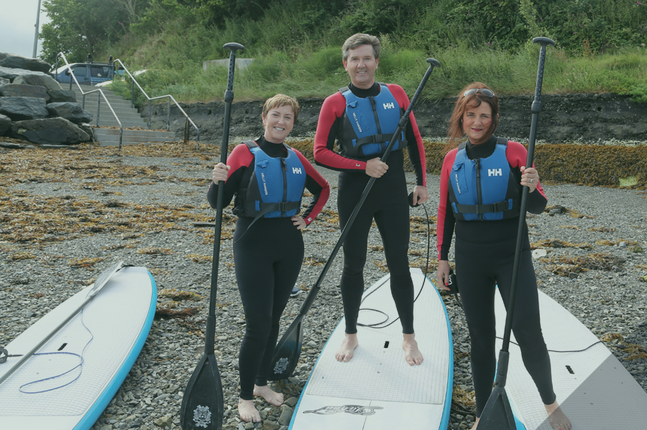 Last week Daniel and Majella O Donnell’s B&B Road Trip series made marginal headway in the ratings battle against long running BBC soap EastEnders. Last night however the husband and wife duo left the soap in the shadows claiming an impressive average audience of 217,000 viewers and a 33% share compared to EastEnders 182,000 viewers and 28% share.

Peaking at 243,000 viewers and a whopping 39% share, the Irish singing sensation has proved he’s a national treasure with viewers making an appointment to view each week and taking to social media in their thousands to show their support for not only Daniel but the heart-warming and characterful B&B owners he meets along the way.

The third instalment in the series, which was simulcast on both UTV and UTV Ireland, drew in more than half a million viewers in total across the island of Ireland with a peak combined audience of 608,000 viewers making a date with Daniel last night. It was the most watched programme in its timeslot for both channels.

Last night saw Daniel get behind the bar in O’Connors B&B in Co. Clare to pull his first pint of Guinness before travelling to meet the vivacious owner of Edencrest B&B in Co. Cork, Josephine, who couldn’t quite keep Daniel’s arrival a secret and instead had the entire town in a spin.

“Daniel and Majella O’Donnell are proving to be a huge hit amongst audiences of all ages and that becomes even more apparent in next week’s episode, where the couple attract huge attention at the Cut Loose Country Music Festival in Thurles. We are delighted with the ongoing success of the series and that there are discussions about broadcasting Daniel and Majella’s B&B Road Trip in the United States.”

The six part series continues next Monday 16th November at 8pm on UTV when Daniel and Majella will be making a stop in Majella’s home town of Thurles Co. Tipperary before moving on to Co. Kilkenny.

In Thurles, Daniel surprises country music fans at the ‘Cut Loose’ Country Festival, where Nathan Carter invites Daniel to join him for a song. The couple spend the night at John and Norah Egan’s B&B and farm in Thurles – a Georgian house built in 1720 on 250 acres of land. John and Norah have eight children and there are four generations of the family living and working in the house.

From Thurles, Daniel and Majella make their way to Celtic House B&B in Co. Kilkenny, owned by Angela and John Byrne – Angela is referred to as ‘Ireland’s Goodwill Ambassador to the World’ by Lonely Planet. Whilst staying in the hometown of the GAA, Daniel and Majella follow in the footsteps of Kilkenny greats, with a hurling lesson. Angela, also a member of the Soulful Spirit’ gospel choir, invite Daniel and Majella to an exclusive performance.

In the remaining episodes of the series, viewers will also see Daniel and Majella tractor racing in Enniskerry, rocking out at a house party in Newtownabby, and going in search of leprechauns in Carlingford with Ireland’s last remaining leprechaun whisperer.

To catch up on previous episodes and for exclusive clips from the series, viewers can visit www.u.tv/roadtrip or join in the conversation using the hashtag #BnBRoadTrip

WATCH: Get to know the couple better with this Q & A session!