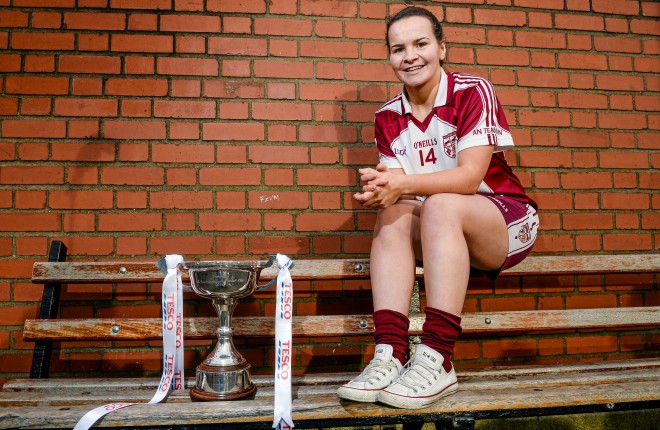 Geraldine McLaughlin, who deservedly picked up an All Star

The nominations for the LGFA TG4 All Star Awards were announced earlier this week and Donegal have three players included in the shortlist of 45 players.

Geraldine Mc Laughlin is named among the forwards on the shortlist for her contribution to Donegal this year. She is joined by Treasa Doherty and Ciara Hegarty who are included in the defenders category.

The shortlist of 45 consists of players selected from ten different counties throughout Ireland. The Donegal women are joined by 11 players from the All Ireland Champions, Cork and 10 players from runners-up, Dublin.

Galway and Kerry have five players each on the shortlist, while Monaghan and Waterford both have three players nominated. Mayo are also represented on the shortlist with two players in the running for an award. The Armagh side which defeated Donegal in the All Ireland Quarter Final have two players nominated while Connacht Intermediate Champions, Leitrim have one player up for honours.

These three players have been nominated for their performances throughout this year. The Donegal ladies nominated have been involved in a season full of mixed emotions. The Donegal team made history when they won their first ever Ulster Ladies Senior Football Championship title when they defeated Monaghan 2-12 to 1-10. The Ulster champions then went on to take on Armagh in the All Ireland Quarter Final but unfortunately fell short and were defeated 2-13 to 2-11.

Geraldine Mc Laughlin plays club football for Termon and has been supplying the county with multiple scores throughout the season. In the Ulster final, Mc Laughlin scored an impressive 2-7 of Donegal’s 2-12 tally.

Treasa Doherty is a club member at CLG Carndonagh while Ciara Hegarty plays club football with Moville GAA club. Both of these Inishowen players have been at the heart of the Donegal defence throughout this year’s campaign.

The last time a Donegal player picked up an All Star award was in 2010 and it was Geraldine McLaughlin’s partner upfront who won it. Yvonne McMonagle was awarded for her performance throughout the 2010 season.

Since it has been five years since a Donegal woman was awarded an All Star, I believe that these three girls are fully deserving of an All Star Award after the performances they gave this season.

The LGFA TG4 All Star award winners will be announced at a gala ceremony at the Citywest Hotel on November 14th. Best of luck to Donegal’s three nominees, no doubt they will do the county proud.