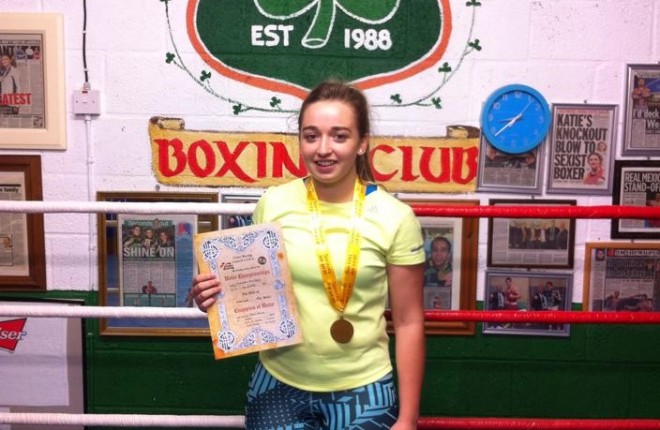 “When I tell people I’m a boxer they don’t believe me and think I’m crazy. They always ask; why go into the ring and risk destroying yourself and getting beat up?”

This is the reaction 18 year-old Melanie Penrose gets when people find out she is a boxer. Although the reaction is negative, it doesn’t stop the young boxer from succeeding at her sport.

The boxer won her first Ulster title when she received a walkover as there was no opponent to fight in her category. Unfortunately for female boxers like Melanie, this is a common problem.#

The female boxers put a huge effort into training and maintaining their weight category but too often find themselves with no competitors. Due to the injury risks involved in boxing, there is a lack of females who are interested in competing in the ring.

“Walkovers happen far too often in female boxing, but I don’t understand why because some of the best boxers are women. When you look at the likes of Katie Taylor I think that should inspire females to want to participate more. She’s a role model to boxing.

“I think male boxing gets priority over female boxing and a lot of old school trainers don’t want or like women fighting. Respect should be given to any fighters that go through the ropes, they are warriors no matter whether they are male or female.” said Melanie.

Melanie got involved in boxing when she participated in a white collar event and she hasn’t looked back since. Melanie currently trains at Raphoe Boxing Club with coaches Gary McCullagh and Gerard McKeavney where she is currently the only female competing at the club.

“My coaches spend time working with me to make me who I am inside that ring and put in hard work and dedication to help me succeed. If I didn’t have them I wouldn’t be able to win titles. Boxers put so much work into preparing for their fights and I’m always learning new things every day from my coaches.”

Boxing is an intensely physical sport but the boxer must also be mentally prepared. Fitness, discipline and self confidence are key elements to become a successful boxer and Melanie works hard every week with her coaches and club mates. After winning her first Ulster title this year, Melanie is now setting her sights further aiming to compete at the Irish Intermediates next year.

“My main aim at the moment is to keep training hard and prepare myself for the Irish Intermediates next year and hope to have that gold Irish medal around my neck. Some day I’d love to go to the Europeans and represent my country.” said Melanie.

Melanie has come a long way since she first set foot in the ring for a white colour event. Although, boxing may be a male dominant sport, Melanie is proof that females can be just as successful as males in this sport.

“In my club I’m the only girl at the moment, there have been a few but they come and go. I hope by reading this more girls get influenced to join boxing. Just go for it!”