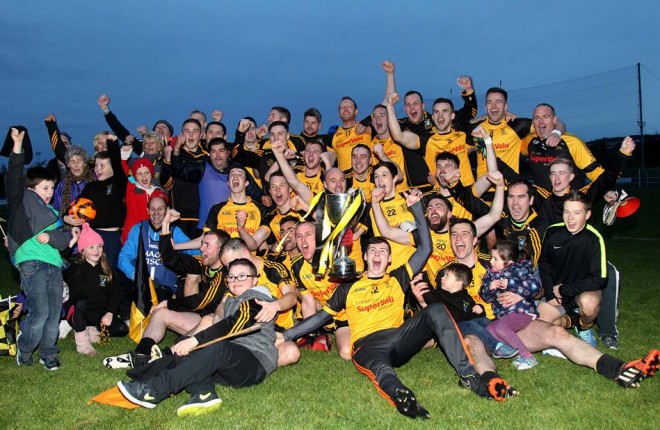 It may be the last weekend in October, but we still have a busy fixture list ahead of us.

Four of our clubs are in Ulster action, and it is a great time for their players and supporters. You can be sure that all the talk in their respective towns will be on GAA matters this week.

No Donegal men’s side have ever landed an official Ulster Club Championship title and it is about time that changed. Hopefully this year we can make the breakthrough.

Naomh Conaill return to the provincial stage for the first time since they reached the Ulster final in 2010.

They are now a well seasoned team and their main players are in the prime of their careers. The vast majority of their top twenty players have represented the county at some age level, and they are definitely not short of good footballers.

Standing in their way, are the Tyrone champions Trillick, who have had a remarkable 12 months.

In 2014, they were defeated in the Intermediate final, and yet one year on, they are senior champions.
It is no fluke either, as they have some of the best young players in Ulster within their ranks.

Mattie Donnelly has had a great season and is in contention for an All Star, while his brother Richard joined him on the Tyrone senior panel this year.

Rory Brennan is an excellent half-back, who has been highly-rated since he starred for St Michael’s, Enniskillen in Ulster Colleges football, and he was a key member of the Tyrone under 21 team that won the All-Ireland last year.

His brother Lee has been recieving rave reviews for his perfromances this term, and he is a player we would have come against a lot whilst I was involved with Donegal underage teams. He has a serious left foot and Naomh Conaill will have their hands full trying to contain him.

We often hear about the competitive nature of the Tyrone Club Championship, but bar Omagh St Enda’s run to the Ulster final last year, their champions often fail to make an impression on the provincial stage.

If we take the last decade, Donegal and Tyrone have dominated the Ulster SFC, yet that hasn’t transferred to the club scene.

I expect Naomh Conaill to come out on top, and if they do so, they will then play the winners of Slaughtenil and Scotstown.

That eagerly awaited contest also takes place this week, and Slaughtneil have been on a super run of form over the last year.

However, it would be no great surprise if the Monaghan champions, who include the Hughes brothers, Darren and Kieran, and Rory Breggan in their team, were to make it through to the final.

Bundoran are out on the Ulster trail as well, just seven days after they lifted the Intermediate title in O’Donnell Park.

They proved much too strong for Naomh Colmcille and it was a really classy display from Brian Gavigan’s team.

The Newtown men will be very disappointed with their showing, but in reality they are struggling to stay up in Division 3, while Bundoran are pushing for the top flight, and that gulf was evident on Sunday.

The game was done and dusted after 18 minutes, and hopefully it won’t leave too many scars for the Naomh Colmcille players.

They have a good young side and have made a lot of progress over the last five years. Hopefully they can bounce back from the harrowing defeat.

Bundoran are one of the strongest Intermediate champions we have had in a long time and they won’t have any fear of Clann Eireann this week.

They will be without Jamie Brennan, who pulled his hamstring last week, and while he is a super player, Bundoran do have a lot of decent forwards who can step up to the mark.

The striking thing about the ‘Star of the Sea’ men is their physicality in the middle third. Paul Brennan, Shane McGowan, and Johnny Boyle make up a fearsome half-back line, while few partnerships will get the better of Ciaran McCaughey and Peter McGonigle at midfield.

When you add in the likes of Gary Clancy and Tommy Hourihane in the forward line, they really do have a lot of pace and power throughout the side.

If we look at the Donegal SFC, five clubs – Naomh Conaill, St Eunan’s, St Michael’s, Kilcar, and Glenswilly – are leading the charge year after year.

I know Bundoran shipped a few heavy defeats from some of those teams last season, but when they are at themselves, to me, they are the best equipped side to break into that top five.

They had a good minor team last year and if they could get some of their emigrated stars to return home, they wouldn’t be far away.

However, first on the agenda for Gavigan’s team are the Armagh champions, and Bundoran will be confident of doing the business in Ballyshannon.

Naomh Ultan will face Cavan side Templeport, St Aidan’s in the curtain-raiser at MacCumhaill Park on Sunday.

It’s been a great season for the Dunkineely side and they have already won the Division 4 title and the Junior ‘A’ Championship.

They will be moving up to Division 3 next season, so this will be a good test for them to see how they are fixed for 2016.

Cavan are traditionally quite strong at Junior and Intermediate level, and Naomh Ultan probably face the toughest challenge of the Donegal teams this weekend.

It will be really tough for them, but they do have some quality players. Alan Lyons is as good as any player in Junior football in the county, and Dermot Gallier is a top-class performer. Daniel Gallagher – who I had in with the county minor squad this year – is a good attacking wing-back and he will look to charge foward at every opportunity.

Brendan McGready’s Naomh Ultan were beaten by Urris in last year’s Donegal final and they went on to reach the provincial decider, so Naomh Ultan may feel that they are not too far away.

The Termon ladies will meet their old foes Donaghmoyne in the Ulster Senior Ladies Club Final on Sunday, and it should be another cracking contest.

Francie Friel and his management team have done a great job with Termon, and they seem to be able to get the best out of their side.

It will be a tough assignment, but I’m sure the prospect of an All-Ireland quarter-final in London will be a great incentive for the Termon girls.

I’d like to wish all our teams the best of luck and hopefully we will be toasting four victories on Sunday evening.

Book season is all the rage in Donegal this week with Rory Kavanagh and Jim McGuinness releasing their memoirs.

There are people who I thought couldn’t even read talking to me about books!

There will be a lot of interesting tales, and a bit of controversy to go along with it too. The first real bit of scandal has been Jim’s claims that some of the Donegal team backed themselves to beat Dublin in the All-Ireland final last year.

I like a flutter as much as anyone, but I would never bet on any match that I was directly involved in.

To be honest, I don’t think it is any big deal, and after that performance against Dublin, if some of the players collected a nice little windfall, I certainly wouldn’t begrude them it.