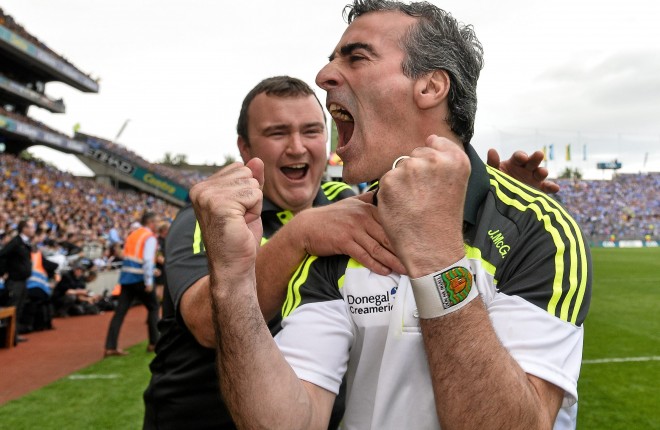 Donegal manager Jim McGuinness celebrates with kitman Joe McCloskey at the end of the All-Ireland semi-final.

OVER 700 people attended the launch of Jim McGuinness’s book ‘Until Victory Always, A Memoir’ in the Highlands Hotel in Glenties earlier tonight.
When he took over in the autumn of 2010, Donegal had been dismissed as a joke. When he stepped down four years later, they had won three Ulster titles, the 2012 All-Ireland and contested the ‘14 final against Kerry.
“If someone had told me when I was running around the pitch in Glenties as a child that I would be involved in three senior All-Irelands and that I would win two, well..
“I am very proud of that. And I owe everything to the players. They showed up, night after night. I have said it to them,” he said.
Members of the All-Ireland winning team including team captain Michael Murphy, his Glenswilly team-mate Neil Gallagher, the McGee brothers Eamon and Neil from Gaoth Dobhair, four-time All-Star Karl Lacey (Four Masters) and Jim’s brother-in-law Colm McFadden (St Michael’s) were joined by former County Manager Michael McLoone, Council Chairman Cllr Ciaran Brogan, family and friends from Glenties, across Donegal and throughout the North West at the launch.
Jim’s four-year period as manager of the Donegal senior football team ranks as one of the most successful in the sport’s recent history and ‘Until Victory Always’ is the story of how Jim combined a unique vision and ferocious drive to create a powerful and disciplined team that bucked history and defied every expectation.
Speaking at the launch, Jim paid tribute to his wife Yvonne, his mother, family, friends and, in particular, the men who went out to do battle for him in the Donegal jersey between 2010 and 204 for their help and support.
“There were people in my life who had a huge impact on me and my thinking and probably shaped me as a person and as a coach,” he said.
“Life is definitely not a straight line and there were sensational highs which we were incredibly fortunate to experience over the last five years – things that we will remember for the rest of our lives – and then there’s challenges in life, difficulties in life and that’s part of the process,” he said.
It wasn’t all sunshine though and there were hard decisions which had to be made – particularly with regard to team choices.
“Management is about decisions and you’ve got to live with them and decide what is the best course of action for every single decision you make and that’s what I tried to do,” he said.
The job as Donegal team manager was all consuming and it meant that Jim spent a lot of time away form Yvonne and his young family as he looked to plot Donegal’s path to glory.
“You’re living in a bubble all the time. There’s maybe eight or ten managers who have designs on reaching an All Ireland final in any given year. They haven’t anything else going on other than that goal. You would see Mickey Harte you see Eamon Fitzmaurice going into a game or out of a game and they’d give you a look that said: ‘I know what you’re doing you know what I’m doing and we’ll keep on doing that ’til we meet again’” he said.
Any regrets from his time as team manager of the Donegal senior squad?
“No regrets whatsoever. Everything was done with the right intentions. We didn’t get everything right and sometimes maybe we put a player on and he would do something that would come back to bite you but – no just privileged to have made the journey – my experience of it and obviously the success because this is very important to be winning.
“To win three Ulster Championships and an All-Ireland – with the U21s we actually played in 5 Ulster finals – and we only lost one so myself and Pat (Shovelin, goalkeeper coach) would have taken that going into Brewster Park (First game with the U21s),” he said.
What about the future? Any chance of coming back to manage Donegal.
“I’m reminded of the movie ‘Dumb and Dumber’ where the man asks the lady does he have any chance and she said about a million to one and he said so there’s a chance.
“Never say never. I love my county but there’s probably a higher chance of me managing these young chaps (his kids) but nobody knows what the future holds – I enjoyed every minute of it,” he said.
Broken into four sections representing each year he was in charge of Donegal, he recalls how the tragic deaths of his brothers Charles and Mark in 1984 and 1998 left an indelible mark on him give a fascinating insight into one of the game’s most brilliant brains.
His passion for Naomh Conaill and Donegal is clear and he recounts how the Donegal players backed themselves at long odds to beat Dublin in last year’s All-Ireland semi-final.
However, the most compelling passages are those about the figures who he perceived did him wrong. Relatively little is devoted to the spat with Kevin Cassidy who McGuinness axed from the squad in 2011 after he contributed to a book written by journalist Declan Bogue. McGuinness maintains there were “inaccuracies” in the book although he doesn’t specify only to state trust had been broken.
There is also mention of his differences with current Donegal manager Rory Gallagher, his former assistant manager, who McGuinness reveals he hasn’t spoken to since telling his eventual successor that he would not be part of his management team in 2014, while he also believes the county board sabotaged Donegal’s 2013 season when they chose to go ahead with club championship fixtures during the summer.
Because of injuries picked up in club matches, McGuinness felt he had one hand tied behind his back: “To my mind, there were people on the county board who wanted me to fail, and if that meant that the Donegal team failed in the process, so be it.”

Until Victory Always — A Memoir by Jim McGuinness (with Keith Duggan) is priced at €24.99 and is on sale from Friday, October 30. Jim will be signing copies of his new book in Eason Bookshop, Courtyard Shopping Centre, Letterkenny, on Sunday, November 1 from 3.30pm.