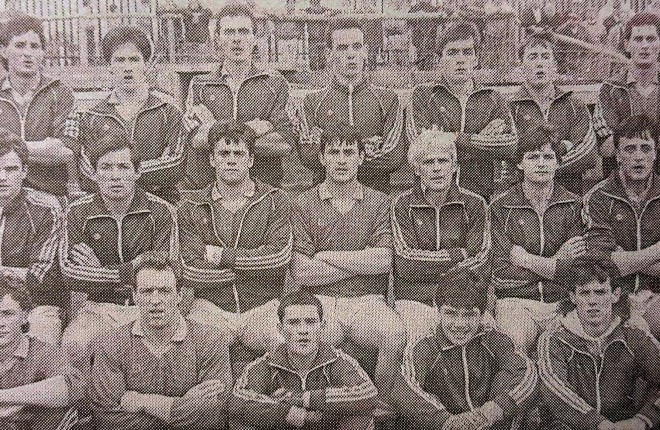 Naomh Columba team who won the title in 1990.

THE Donegal News headline read “Naomh Columba end twelve year jinx” and said that the Glen men came to Ballybofey on a mission back in 1990.
“One has to go back to 1978 when Michael Oliver McIntyre captained the team to find a success at this level. Although pre-match speculation was that in a man-to-man basis, Killybegs were much stronger, it turned out not to be the case,” the report read.
“On a day when each player on the Naomh Columba team was a star it was half forward Seamus Carr who stole the show with five wonderful points, all from play. Indeed all the winning teams scores, but one, were from play. Carr was a constant thorn in the Killybegs defence with his lightning speed and accuracy from play.
“Paddy Hegarty was masterful at centre half forward scoring two fine points. Noel Carr was the pick of the full forward line where Michael Oliver McIntyre also impressed. In defence, Sean Gavigan was excellent and ably assisted by Noel Hegarty and John Joe Doherty.”
It also noted that Glen mentors Paddy ‘Beag’ Gillespie, Sean Burke and Michael Oliver McIntyre, who lined out at full-forward, were meticulous in their preparations.
“They had waited too long for Sunday’s game to go down without a fight. At approximately 5pm the most delightful sight in MacCumhaill Park was the figure of Paddy Beag on crutches dancing his way to the crowd. For all of thirty seconds the pain of an achilles tendon injury was suddenly gone.”
Over 3,500 people were in attendance that afternoon as a last minute Noel Hegarty free won the title, 0-10 to 0-09.
“It would have been a travesty had the men form Glen not won the game. They played with more urgency and spirit than their mediocre opponents who struggled in vain to play with cohesion,” the report read.
Post match team captain John Joe Doherty said that, at no stage, did he think that they were going to lose: “However, I was concerned that we did not convert large amounts of possession into scores in the first half. Seamus Carr was brilliant. Our full back had to take the kick outs which left Killybegs with a man free out the field but somehow we always managed to have our man behind the ball when they came forward. I am really looking forward to the Ulster Championships now. We are a young team and hopefully this victory will do us good,” Doherty said.
Man of the Match Seamus Carr said he was delighted to have received the award.
“It was one of those days that everything went right. Other days things might not have gone as well. It was a tough game and I thought when they drew level 0-09 each it was going to a replay. However, Michael Oliver put me in the clear and I was going for a point as I knew that time was almost up. I was fouled and Noel put it over. It was a good team performance by us and Killybegs tried hard throughout.”
Naomh Columba ‘keeper Kevin Doherty said the skirmish at the end was the only time he had been really tested.
“I had to block two goods shots. I was always aware that Killybegs would put the big men in the box for scores so I was prepared for any shot. It is great for me being so young to win the title,” he said.
Advertisement