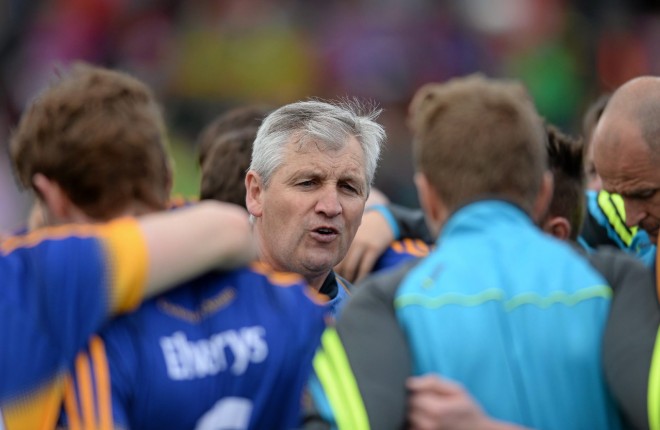 BY HARRY WALSH
THE Donegal sporting public will be hoping that Charlie McGeever can lead Tipperary to the All-Ireland minor title on Sunday afternoon. The Derryconnor man is coming to the end of his third, and final, year in charge of Tipp and will be looking to overcome Kerry in a repeat of this year’s Munster final.
Kerry led by 2-05 to 0-03 after quarter of an hour in the provincial decider but McGeever’s men recovered well, beating Connacht champions, Galway in the All-Ireland quarter final and Leinster champions, Kildare in the semi final.
Speaking to the Donegal News on Wednesday, McGeever admitted that they got things wrong ahead of their last meeting with Kerry.
“As a management team we made a lot of errors. Seventeen of our lads were doing the Leaving Cert for the three weeks in the lead-up to that game and, as a result, we didn’t have one collective training session. I had seen a lot of Kerry and tried to sort out match-ups but I over complicated things.
“We’ve improved a lot since then and we won’t be as bad again but then again Kerry will have improved too. They’re the reigning All-Ireland champions and they’re also Munster champions. Add to that their tradition and the Jack O’Connor factor and you’ll realise the size of the task at hand,” he said.
More renowned as a hurling county, nine of this weekend’s panel were also part of the Tipp team who lost the All-Ireland minor hurling final against Galway two weeks ago.
“They came back to us very flat and they’ve now got two options on Sunday. They can go out and feel sorry for themselves or try to make sure it doesn’t happen to them twice in the one year. I hope they’ll all choose the latter option. They went into the hurling final as firm favourites while they’ll go into Sunday’s game as underdogs. It should be interesting,” he said.
Tipperary, who last won the title in 2011, are bidding for their third All-Ireland crown. Win or lose, Sunday’s final will be McGeveer’s last game at the helm and he has no ambitions of managing the Tipp senior team.
“The club (Clonmel Commercials) is very important to me. I’m manager of both the U21 and senior teams. We’re a bit like St Eunan’s in that we’re a town team and supplied a lot of players to the 2011 winning team. That’s where I see myself in the future,” he said.
McGeever has enlisted the help of Letterkenny’s Michael McGeehin as the team trainer. “Michael took their last proper training session last night (Tuesday) ahead of Sunday’s final. It’s the first time this year that we’re injury free and we’ll travel up to Dublin from Tipp on Sunday morning. The lads are all looking forward to it and we’ll now see what happens on the day,” he said.
Charlie’s mother Gracie will travel from her Derryconnor home to attend Sunday’s final where she will be joined by Charlie’s brother John Joe and sisters Noreen and Sandra.