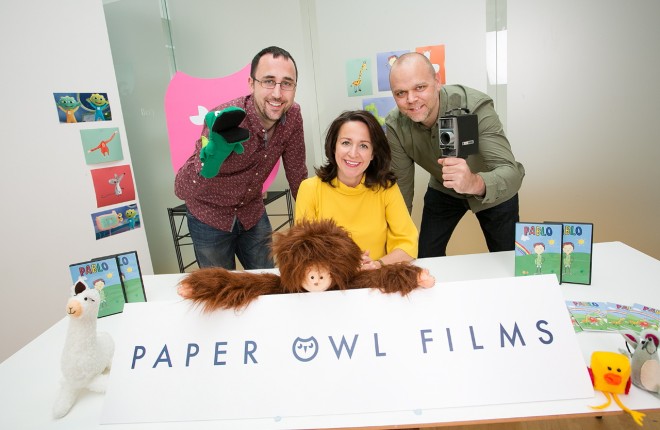 Gráinne McGuinness started Indee Productions in 2012 alongside her nephew Gavin Halpin and her husband Stephen Petticrew.

BY HARRY WALSH
A production company which was founded by a Letterkenny family is celebrating this week after being awarded a major contract with CBeebies, the BBC’s Children’s TV network.
Gráinne McGuinness who is originally from Port Road, started Indee Productions in 2012 alongside her nephew Gavin Halpin from Cullion Road and her husband Stephen Petticrew.
They’ve been awarded a contract with CBeebies for their animation ‘Pablo’, the first children’s series to be made about a character on the autism spectrum.
It is double celebration for the firm as they have just rebranded from Indee to Paper Owl Films. This week, Gráinne is attending a major industry conference in Toulouse.
Speaking to the Donegal News from the south of France on Wednesday, Ms McGuinness said it has been an incredibly exciting journey since they started the company around the dining room table three years ago.
The company, which produces a wide range of documentaries as well as commercial, corporate and children’s content for film, TV and digital platforms, developed Pablo in order to give children a better understanding of autism and will produce the series alongside Kaveleer Productions in Dublin.
“I look after children’s content, Gavin takes care of the documentaries while Stephen is the editor and looks after the post production side of things,” she said.
The mother of two young girls Rosie (7) and Jade (4), Gráinne is a former student of Loreto, Letterkenny and University of Ulster where she completed a degree in Media Studies.
“While I enjoy attending the international markets and being at the heart of a leading creative hub with companies from across the world and pitching our work at this international level I miss the girls,” she said.
The deal which will see the programme watched by thousands of children across the UK and Ireland is a major coup for the company which has enjoyed a steady period of growth since its inception in 2012.
“We’re thrilled to be working alongside CBeebies on this project and we’ve also been very lucky to have been commissioned to make a number of programmes including factual documentaries for BBC NI and TG4,” she said.
While Gráinne is in Toulouse this week her husband Stephen and nephew Gavin stayed at home to put the finishing touches to ‘Racht’ a six-part crime documentary series for TG4.
“It’s about how crime in small rural isolated areas of Ireland rocked the very fabric of those communities for generations. We look at six different crimes from very small, isolated communities. It’s pretty strong stuff and will air over the coming weeks. Gavin has the brains for that stuff while I prefer to help drawings come alive,” she said.
“Pablo is a loveable five year old boy who uses his magic crayons to turn the challenges he faces into adventures helping him deal with the world with confidence. Our aim is to give young children understanding and empathy with those on the autism spectrum as they grow and form relationships with each other,” she added.
Gráinne has been based in Belfast for the past twenty years but she loves nothing better than to get home to Donegal.
“We were filming in Glenveagh last week and I stayed with my sister in Woodlands. There’s no better way to wake up on a Sunday morning that hearing sheep and birds outside your window. There’s so much space and the kids love it,” she said.
Gráinne arrives home from Toulouse today before travelling to Cannes next month where she will pitch yet more projects and ideas to investors and broadcasters.