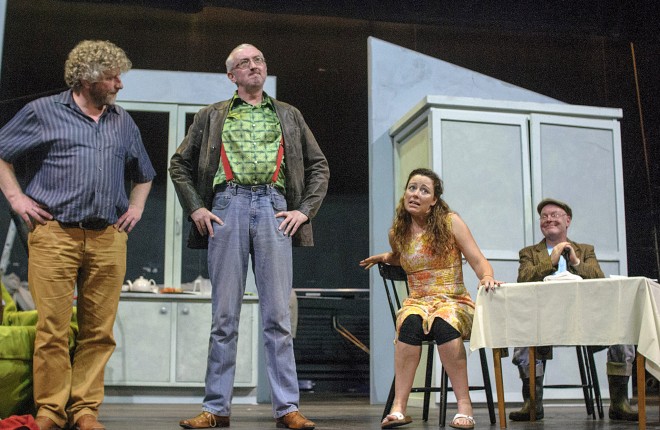 COMEDY lovers will get another chance this Thursday night to catch the hilarious world-famous Italian classic – ‘Can’t Pay? Won’t Pay’ in Ballybofey.

The new Bread and Roses Theatre Company presents a ‘Donegal treatment’ of the legendary Dario Fo’s political comedy farce in the Balor Theatre.

Directed by Kathleen McCreery, it received rave reviews during the recent Earagail Arts Festival, and the excellent cast features Valerie Bryce, Margaret Hannon and Eoghan Mac Ghiolla Bhríde. They will be joined on stage by Michael Leddy (Bookworms) and Martin McGinley, best known as one of Donegal, and Ireland’s, finest fiddle players.

Speaking to the Donegal News this week, Ms McCreery stressed that while the play is very topical, it is “not about water charges.”
“It is going to be very, very funny, but it has some serious themes which are very relevant today in Donegal,” she explained.
Set in 1970s Milan, Italy, it is centred around the spiralling cost of living, low wages and “political twists.”

The main character, Antonia, and her neighbours are desperate and are struggling to feed their families.

When their local supermarket puts up the prices, yet again, the women snap.

A mutiny kicks off, the shelves are cleared and freezers emptied in a joyous protest against the market forces that are keeping them impoverished.

But Antonia’s hard-working husband, Giovanni, is honest as the day is long, so she enlists the help of her friend, Margherita, to hide the shopping she’s  “liberated”, spinning ever more surreal stories which leave their menfolk reeling.

Soon, the police are in hot pursuit and there’s an epidemic of spontaneous pregnancies as the consumer backlash spreads like wildfire.

The only actor to ever win a Nobel Prize, Dario Fo’s farces are as fiercely provocative as they are funny, and as relevant today in Donegal as in his native Italy.