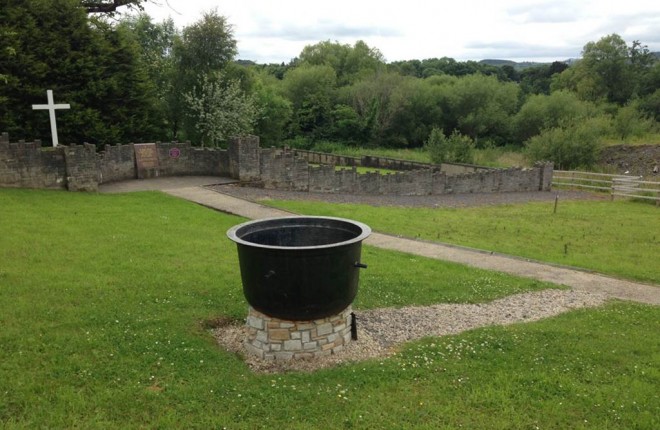 A PROJECT by a Donegal man to catalogue the remaining ‘Famine pots’ around the country could result in the creation of a number of jobs in the county.

In 2011, John Cassidy went in search of one of the old vessels, which were used to make soup, in his native parish of Townawilly, near Donegal town. He now lives and works in Dublin.

It had become the property of local farmer, Patrick Colhoun. In later years, however, the pot was used to heat water by the local farmers when they were dipping sheep.

“I went in search of the famine pot only to discover it had been attacked and broken in a number of pieces,” he explained.

“A quick check revealed two small pieces of the pot were missing. Thanks to the expertise of Stephen Jarvis, the famine pot was restored to its former glory.”

The pot is now on display at Leghowney Community Hall as a memorial to the Famine victims, the emigrants and all the survivors. When John was getting the pot repaired, he asked Mr Jarvis to make a number of miniature ones.

“I got six made and people loved them, so I ordered more. A few were sent to America and the Americans loved them too,” he explained.

“However, the miniature pots were too expensive to post to America so I got a few ceramic samples made. They also proved hugely popular and I’m now looking for someone to make them in Donegal, and create a couple of jobs in the process.”

In 2012, John and his friend Mattie Lennon began researching the history of the famine pots and the vital role they played during the famine years.

Over the past twelve months, they have located a number of these priceless artefacts and would be grateful for any information or photos of famine pots in your area.

They have also made a documentary on the subject, which is to be launched next month.

For full report, see this Monday’s Donegal News or subscribe to our digital edition on www.donegalnews.com